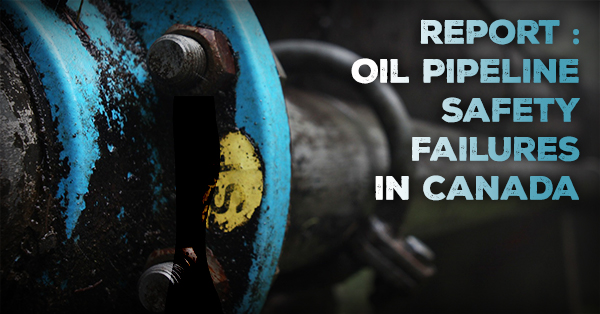 World class safety” regimes and “state-of-the-art” technology for oil pipelines? The facts are telling another story.

Montreal, June 14, 2018 – There were more pipeline incidents in Canada in 2017 than in any other year since 2008 (173 incidents reported), according Équiterre’s new report entitled “Oil Pipeline Safety Failures in Canada: incidents, accidents and spills and the ongoing failure to protect the public”. 55% of incidents in Quebec and 23% of incidents in BC occurred in 2017 alone.

The study, which combed through the National Energy Board (NEB) and Transportation Safety Board (TSB) databases, zoomed in on four pipelines in Quebec (two of them that also operate in Ontario) to examine the safety track records of oil being moved through pipelines in Canada as well as the effectiveness of federal (and provincial in the case of Quebec) enforcement measures aimed at ensuring pipeline safety in the country.

The analysis and findings of the report strongly challenge the picture of pipeline safety as often portrayed by governments and industry. From 2004 to 2017, Quebec experienced over 100 pipeline safety incidents. Of these, 23 involved spills of either refined petroleum products or crude oil.

“The National Energy Board is failing to protect Canadians and the environment from pipeline incidents,” states Steven Guilbeault, Senior Director at Équiterre. “Not only is it failing to ensure the safety of existing pipelines, but it is also responsible for authorizing the development of new ones. With our federal government’s recent significant purchase of the Trans Mountain Pipeline, Canadians should be worried by this report’s findings that show that the agency responsible for enforcing pipeline safety is not capable handling the work that’s currently on its plate.”

The report reveals that the impact of monetary penalties has been limited by the relatively sparse use of this enforcement mechanism and by the fact that fines levied to date are insufficiently high to deter violations. Safety Orders and Inspection Orders are not frequently employed and effectiveness is limited.

The Trans-Nord pipeline has received numerous safety orders from the National Energy Board since 2010, yet incidents have increased. It remains to be seen whether the 10 new Board Letters and Safety Orders issued in 2017 will see results. Meanwhile, records posted online by the National Energy Board indicate that there have been zero Inspection Officer Orders since 2012 and zero Administrative Monetary Penalties at the federal level. Within Quebec, one administrative monetary penalty – for a mere $2,500 - has been imposed upon Trans-Nord.

“If I had 79 violations of the highway code in the past 10 years, I certainly wouldn’t have a driver’s licence anymore and I might even be in jail,” added Guilbeault. “And yet, companies like Trans-Nord can continue operating with impunity and with a total disregard for the safety of citizens and the quality of our environment.”

Why are spills and incidents still happening?

Despite assurances by industry and governments, and despite the rhetoric and regulations, why are pipeline spills and incidents still happening? The answers seem to flow from two troubling realities: claims of “world class safety” regimes and “state-of-the-art” technology for oil pipelines have amounted to little more than meaningless marketing mantras, while lax federal and provincial enforcement are letting oil pipelines continue to pose unacceptable risks in Québec and beyond. These findings underscore the urgent need to move beyond oil and to take stronger measures to protect against pipeline safety spills and incidents during the transition to a cleaner energy future.

Équiterre recommends the following actions at the federal and provincial levels to help keep Canadian communities and the environment safe from the risks associated with oil pipelines:

To read the report: Oil Pipeline Safety Failures in Canada