The spectre of Keystone XL: Will the Canadian government align its energy policy with the Trump administration ? 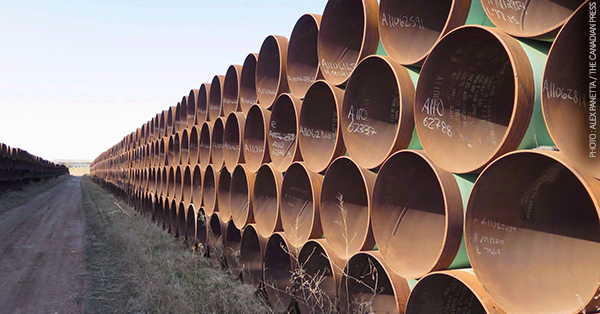 Ottawa, January 24th 2017 - President Donald Trump signed today two executive orders aimed at advancing the Keystone XL and Dakota Access oil pipelines. As the spectre of those projects is revived, Équiterre wishes to remind the Canadian government of the necessity to stay the course on our climate change commitments.

“While the U.S. administration may have changed, the massive opposition to this pipeline remains, on both sides of the border. A green light by the Trump Administration doesn’t mean that the project will get built” stated Sidney Ribaux, executive director at Équiterre.
“Should Enbridge Line 3, Kinder Morgan and Keystone XL pipelines all get built, the potential cumulative GHG emissions resulting from the oil sands expansion would mean Alberta would blow through its 100Mt cap that was committed in its climate plan” said Steven Guilbeault, director principal at Équiterre. “The federal government must ensure that carbon pollution goes down everywhere in Canada, including the tar sands, if we are to reach our Paris commitments”” added M. Guilbeault.

Finally, looking at new emissions projections released by Environment and Climate Change Canada last December, we see that Canada’s oil and gas sector will grow to 31% of our total emissions by 2030” stated Annie Bérubé, director of government relations at Équiterre. “While all sectors of the economy are expected to drastically reduced their emissions under the new pan-canadian framework on clean growth and climate change, we let the oil and gas sector get away unaffected by our climate change commitments. This continued expansion of our oil sands exports is incompatible with our climate change commitment under the Paris Agreement” concluded Ms. Bérubé.

The Keystone XL pipeline, if completed, would carry Canadian oil sands crude from Alberta to Texas. The Keystone pipeline was at the center of one of the largest opposition campaigns in the history of the U.S. environmental movement, with activists launching a years-long push to kill the project. Former President Barack Obama rejected Keystone in 2015 after a lengthy analysis of the project.