100 Debates on the Environment will take place across Canada 2 weeks before the 2019 federal election Save the Date: October 3, 2019 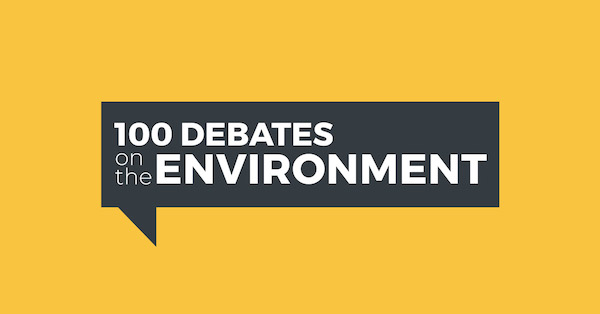 Montreal, June 12, 2019 -- Today, on UN World Environment Day, GreenPAC is providing
a “Save the Date” notice to incumbent MPs and candidates, announcing that 100
non-partisan all-candidates debates on the environment will take place on the same
night during the federal election campaign. The initiative will make October 3, 2019, the
second-most important day in the campaign.

“Debate organizers are already in place from Charlottetown to Penticton and from Milton
to Yellowknife,” said GreenPAC Executive Director Sabrina Bowman, noting that more
than 65 debates have already been confirmed (see the current list of ridings below).
“This is an unprecedented opportunity for local candidates to communicate their
positions on this critical topic.”

“Concerns such as climate change and water pollution are now ballot box issues for
voters from all walks of life,” added Bowman. “100 Debates is a solution-oriented,
non-partisan forum for Canadians who want to see our political leaders work together to
build a safe and healthy environmental future.”

Each debate will have community hosts and moderators. These include local businesses
and non-profit organizations, health and medical groups, schools, colleges and
universities, and individuals.

Issue-based all-candidates debates have never taken place in Canada on this scale. If
you are interested in attending or organizing a debate in your riding, please check out
www.100debates.ca.

ABOUT 100 DEBATES ON THE ENVIRONMENT:

100 Debates on the Environment is a project coordinated by GreenPAC. Visit
www.100debates.ca for more information on the project and for a list of local debates.

Launched in 2015, GreenPAC is Canada’s non-partisan non-profit organization that
works to build environmental leadership in politics. GreenPAC’s other initiatives include a
political internship program on Parliament Hill in Ottawa, as well as a non-partisan
endorsement program for aspiring political candidates with a demonstrated commitment
to the environment. Visit www.greenpac.ca for more information.