The Rise of Light-duty Trucks in Canada

Conducted by Équiterre in conjunction with the Mobility Chair of Polytechnique Montréal, the Centre for Interuniversity Research and Analysis on Organizations (CIRANO), HEC Montréal and Horizon Advisors, the purpose of the study entitled "The Rise of Light-Duty Trucks in Canada: Reversing the Trend” is to explain the causes behind the growing preference among Canadians for oversized, energy-inefficient vehicles as well as the consequences of this phenomenon in order to be able to propose possible solutions. 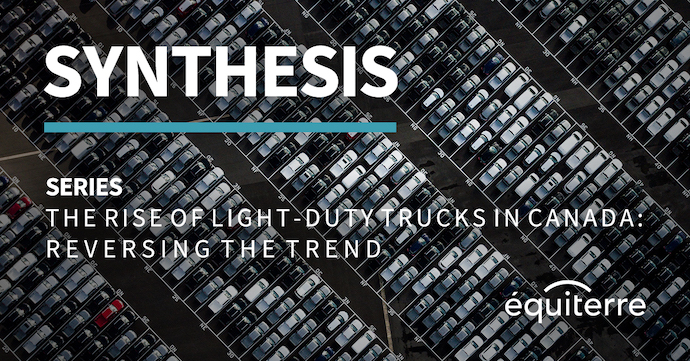 The final report also explores the motivations behind vehicle purchases, the advertising practices and strategies used by the automotive industry, the legislative framework for automotive advertising, and the most effective messages for discouraging the purchase of an oversized, energy-inefficient vehicle. As such, the study provides a comprehensive look at the issue before putting forward any public policy recommendations.

While Canada has committed to the Paris Agreement and presents itself as an international climate leader, the country remains one of the largest polluters per capita in the world and is not on track to meet its various greenhouse gas (GHG) emission reduction targets. In 2020, the transportation sector accounted for one quarter of Canada's emissions and almost half of Quebec’s emissions (44.8%), making it a key sector in the collective effort to meet the 2030 and 2050 targets.

When it comes to Canadians’ preferences for personal vehicles, the numbers speak for themselves. Between 1990 and 2018, the number of sport utility vehicles (SUVs), pickup trucks and vans in the Canadian fleet rose by 280% and by 306% in Quebec. The sales of light-duty trucks reached an historic high of 79.9% in 2020 and accounted for 81% of sales between January and September 2021.

1. A PHENOMENON WITH MULTIDIMENSIONAL CONSEQUENCES

This chapter is the result of a review of the literature on light-duty trucks conducted by Équiterre and of analyses and modelling carried out by the Mobility Chair of Polytechnique Montréal in the report entitled "Light-Duty Trucks: Impacts of the Transformation of the Light-Duty Vehicle Fleet in Quebec."

1. What are the impacts on the environment?

2. What are the impacts on public safety?

Due to their greater weight and height, light-duty trucks pose an increased safety risk to road users, and especially to pedestrians.

3. What are the impacts on the road network and on the economy?

A vehicle fleet that consists predominantly of longer and heavier vehicles accelerates the deterioration of the road network, resulting in longer and more frequent congestion, premature wear and tear on roads, and a significant loss of space and parking capacity.

4. What are the impacts on personal household finances?

2. ISSUES OF DEFINITIONS AND CLASSIFICATION

The data presented in this section are taken from the study entitled "Light Trucks: Definitions and How the Supply Has Evolved" which was carried out by the Mobility Chair at Polytechnique Montréal.

1. How does the automotive industry classify vehicles?

The methods used to classify light-duty vehicles vary within the automotive industry, which does not have a clear definition for SUVs and other light-duty trucks.

2. How do governments define light-duty trucks?

There are variations across jurisdictions when it comes to the definition of light-duty trucks.

3. UNDERSTANDING THE EVOLUTION IN THE SUPPLY OF LIGHT-DUTY TRUCKS

The data presented in this section are taken from the study entitled "Les camions légers: Définitions et évolution de l'offre" conducted by the Mobility Chair at Polytechnique Montréal (see section 2 for documentation).

1. How have vehicle characteristics evolved over time?

For over a century, vehicles have been increasing significantly in size. At the same time, vehicle models and versions have expanded.

2. How do CUVs differ from SUVs?

The advent of CUVs, which are often smaller, more fuel-efficient and cheaper than traditional SUVs, is contributing to the growing popularity of light-duty trucks.

4. UNDERSTANDING THE DEMAND FOR LIGHT-DUTY TRUCKS

The data presented in this section are taken from the study entitled "Light-Duty Trucks: Factors Contributing to the Transformation of the Light-Duty Vehicle Fleet” which was carried out by the Mobility Chair at Polytechnique Montréal.

1. What explains the growing demand for larger vehicles?

The growing and increasingly diverse demand for large vehicles can be explained by a variety of economic, political, technical, legislative, social and psychological factors.

Some of the factors driving the demand for larger vehicles include:

2. What historical elements help us to understand their popularity?

Throughout the history of the automobile, automakers' marketing strategies, government policies and consumer preferences have all played a major role in the current popularity of light-duty trucks.

3. Which Canadian regulatory elements play a role in the increased number of light-duty trucks on our roads?

The federal Passenger Automobile and Light Truck Greenhouse Gas Emission Regulations have a number of weaknesses that could produce an effect that is contrary to the desired impact of improving vehicle fuel efficiency.

Less-stringent emissions standards for light trucks than for cars and incentives for the adoption and development of inefficient technologies mean that it is easier for manufacturers to meet the regulations.

Under the current system, it is possible for car manufacturers to end the year with higher actual emissions from their sold vehicles, but also with higher allowable emissions.

It has also been found that an early vehicle replacement program in British Columbia may have accelerated the growth in demand for light-duty trucks and the reshaping of that province's vehicle fleet.

4. Which economic factors are driving the trend toward oversized vehicles?

The purchase of light-duty trucks is being driven by a combination of factors relating to households, governments and financial services.

SUV and CUV ownership is increasing significantly across all socio-demographic groups and household types and in all Canadian provinces.

5. UNDERSTANDING WHAT MOTIVATES THE PURCHASE OF LIGHT-DUTY TRUCKS

The data presented in this section was the subject of one of the components of the study entitled " Achat de camions légers au Canada: Analyse des motivations,” carried out by CIRANO and HEC Montréal.

1. What factors influence the propensity to choose an SUV?

Intentionality to purchase an SUV is influenced by various factors internal and external to the individual.

Some of the key internal factors identified were:

The external environment (social norms, media and advertising) also plays a role in the development of individual preferences.

2. What are the key findings with respect to internal factors?

It was observed that those individuals who were most likely to purchase an SUV place a high degree of importance on values such as ambition, power, influence and authority, and enjoy driving. We also found that individuals who have strong environmental values or who view a vehicle as simply a means of getting from point A to point B are less likely to purchase an SUV than those who view their vehicle as indispensable (this was the true for 5.73 out of 7 individuals).

3. What were the principal findings with respect to external factors?

Information sources, such as dealers and friends, descriptive social norms and the media all have a significant influence on vehicle selection.

4. What are the key findings from the personal interviews conducted in understanding the motivations for purchasing?

The decision to purchase an SUV is motivated by a feeling of superiority, control, safety and conformity that drivers associate with this type of vehicle.

Persons who own an SUV:

6. UNDERSTANDING THE ROLE OF AUTOMOBILE ADVERTISING

The data presented in this section are taken from the Équiterre study entitled “Limitless: Car Advertising in Canada - Practices, Regulatory Framework and Recommendations.”

1. What are the dominant themes and messages seen in Canadian automotive advertising?

These messages undermine the making of informed decisions when it comes to selecting a vehicle.

2. How much is spent on automotive advertising?

The automotive industry ranks first in terms of spending on digital advertising.

Automotive advertising, including advertising for light-duty trucks, is big business in Canada. While 47% of new vehicle purchasers say they are influenced by some form of media throughout the buying process, in 2018, the auto industry alone accounted for 21% of all spending on digital advertising.

3. Which laws, regulations and standards govern automotive advertising in Canada?

Canada’s advertising legislation is inconsistent with government climate change targets and needs to be changed to reflect the climate and environmental emergency.

4. What are the best regulatory practices for automotive advertising from other countries?

Canada could learn from the more stringent requirements in place, notably in Europe and Oceania, to regulate automobile advertising.

5. What are the main conclusions from the focus groups on advertising?

Respondents approve of SUV-related advertising messages, but point to a lack of transparency on price and expressed their mistrust of the auto industry.

Information regarding the environmental impact

“We have a collective addiction to light-duty trucks. We now need a shock treatment to get us off them. While most sectors are reducing their GHG emissions, Canada is still behind on its climate targets and emissions from the transportation sector are increasing. Advertising practices are exacerbating this trend." – Andréanne Brazeau, Mobility Analyst

"There are many areas of intervention that are emerging. Changing the narrative around what is considered normal or desirable by society is necessary. SUVs should no longer be seen as something to aspire to. Now that they have become the symbol of the family, we need to ask ourselves what legacy we want to leave our children. Do we really want ever larger vehicles that threaten our living environments?" - Andréanne Brazeau, Mobility Policy Analyst at Équiterre

The Rise Of Light-Duty Trucks In Canada: Reversing The Trend