BAPE on GNL : Historic participation exposes the flaws of an outdated project 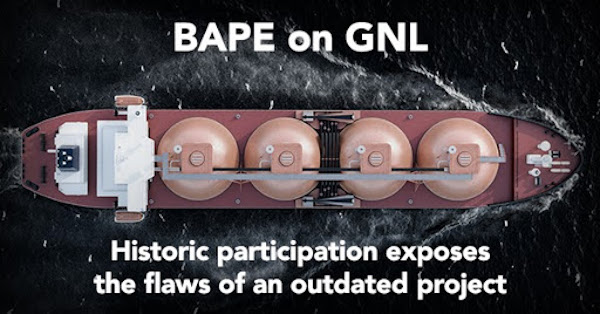 At the end of the hearings, 78% of testimonies were against or clearly opposed to the project (138 AGAINST, 36 FOR). Beyond this simple tally, the wide-ranging sentiment expressed and felt during the hearings in the past two weeks was one of consternation that in 2020, in the midst of a climate crisis, we must still mobilize against a fossil fuel development project.

Here is an overview of the project >>

There was broad consensus over the past two weeks about the need to study the entire project (from the extraction of fossil gas to its combustion), with individuals, organizations and experts deploring the fact that the mandate of the BAPE commission is only a truncated and dishonest vision of reality.

The moral issue that the project could have disastrous consequences for future generations was emphasized by many young Quebecers during the hearings.

"We are the future workforce and we are not interested in working for GNL/Gazoduq. We are the generation that will suffer the environmental consequences of this project, and the investors and decision makers don't seem to want to listen to us," said representatives of the Association générale des étudiants et étudiantes du collège de Chicoutimi (AGEECC).

Promoter's arguments destroyed one by one

In response to the many concerns heard during the hearings, advocates of the project did nothing more than repeat the promoter’s sales arguments over and over again, without regard for the scientific studies demonstrating the economic non-viability of this fossil gas liquefaction plant or its unacceptable environmental impacts.

"In light of everything that has been exposed in recent weeks, we would like to emphasize that anything other than a clear and unequivocal rejection of the project by the government will result in an unparalleled mobilization and outcry. Quebecers deserve better. We have managed to shut the door on other outdated fossil fuel projects. We will do it again," concluded the various groups.

-More than 3,000 briefs were filed for the BAPE.
-There were 178 participants at the hearings.
- 89 244 Quebecers have signed the petition to express their opposition to the project.
- 48 student associations, representing more than 300,000 students, have adopted a mandate against the project.