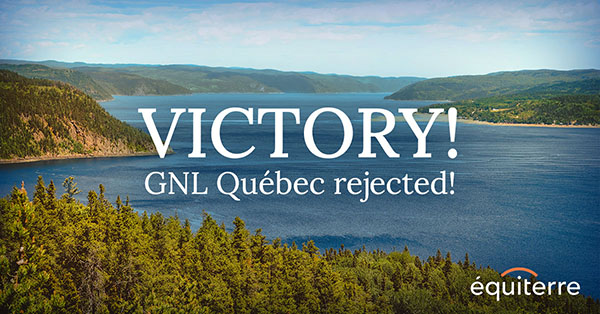 Montreal, Quebec, Rouyn-Noranda, July 21 2021 - The signatory groups welcome the Quebec government's announcement rejecting the GNL Québec LNG project. This announcement is a victory for the tens of thousands of people who have mobilized over the past three years.

Over the years, more than 120,000 Quebecers have signed a petition against the project. There are also 54 student associations representing nearly 360,000 students, more than 648 scientists, including 250 doctors and health professionals, 40 economists, more than 60 civil society groups, all opposition parties (representing 58% of voters) and three Innu communities that have taken a stand against GNL Québec. The public consultations of the Bureau d'audiences publiques sur l’environnement (BAPE) also saw a historic participation with the submission of more than 2500 briefs — of which more than 90% were opposed to the project — leading to a devastating BAPE report. This rejection is the result of an unprecedented collective effort of which thousands of Quebecers can now be proud.

With this decision, the government is siding with the many scientists who have condemned the project, both because of the enormous GHG emissions it would have generated and because of the harmful effects on the St. Lawrence belugas.

"The Quebec government's announcement of the rejection of the GNL Québec project demonstrates that there is no future for fossil fuel projects," said the environmental groups. “With the death of the Energy East pipeline in 2017, the setback of Goldboro LNG earlier this month and the rejection of GNL Québec today, we can finally look forward to a future without new pipelines in la belle province."

This decision is also the result of several years of mobilization. The first protest against the project was organized by frontline activists from the Innu nation in 2017, and since then the mobilization has not stopped growing: hundreds of events against the project have taken place across the province. These demonstrations have brought together hundreds of thousands of Quebecers of all ages and backgrounds behind a common slogan: “We deserve better!”

The groups would also like to highlight the leadership of local organizations that have stood up to Goliath in recent years, including the Fjord Coalition in the Saguenay, the Innu Mashk Assi collective on the Nitassinan, the Mouvement citoyen littOralement inacceptable in Tadoussac, the Comité citoyen carboneutre de la MRC de Maskinongé in the Mauricie region, as well as Gazoduq parlons-en, the Rouyn-Noranda Anti-pipeline Coalition and Action boréale in Abitibi-Témiscamingue.

"It is now time to move forward and develop projects for a resilient future”, the groups concluded. “We must work to implement an ecological and social transition by putting forward sustainable economic development projects that respect nature. We are excited to turn the page on four years of relentless mobilization and are ready to participate, with local communities, in the development of forward-looking projects committed to a green transition in a 21st century economy."

The signatory groups are :