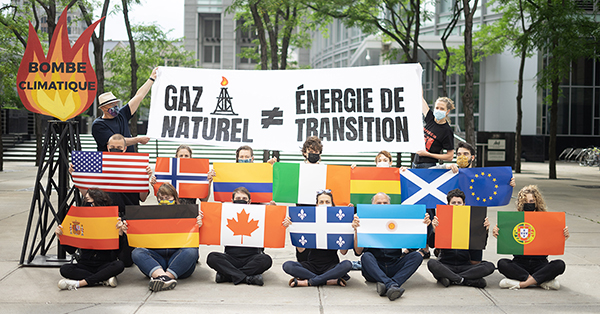 Montreal, July 30, 2021 - In the wake of the rejection of the GNL Québec/Gazoduq project, activists mobilized this morning in front of the German consulate in Montreal in solidarity with the mass civil disobedience action currently taking place in Germany against fossil gas led by the group Ende Gelände. They also demanded that the Legault government close the door on any future and potential gas exploitation, import or export project in the province.

The action also took place in solidarity with dozens of environmental groups in nearly 15 countries around the world and is part of the international Shale must fall campaign. Similar actions took place in Argentina, Belgium, Colombia, the United States and Ireland, among others.

About twenty activists have staged a photo-op, which included a banner where we could read "Natural gas = no transition energy". The flags of the ten or so countries where actions took place during the day were also visible as well as a scale model of a hydraulic fracturing tower and a gas pipeline accompanied by a flame that read "CLIMATE BOMB".

"For years, a huge marketing and public relations effort has been in motion to sell fossil gas to us as a transitional energy, one that would serve as a bridge between the oil era of the past and a future where green energies will eventually dominate. This is what the promoters with the GNL Québec/Gazoduq project tried and failed to do '' say the groups supporting this action.

"In Quebec, as in Germany and elsewhere in the world, more and more of us are seeing through the industry's shenanigans. We are therefore asking the government to never again have a "favourable bias" when a project involving fossil gas is presented. We ask that the door be closed permanently on any future project involving this fuel that contributes to the climate crisis," the groups added.

In short, adding methane emissions to CO2 emissions is neither a gain for the planet nor a symbol of any "transition".