Léger Poll: Quebecers do not want GNL Québec and do not want to see public funds invested 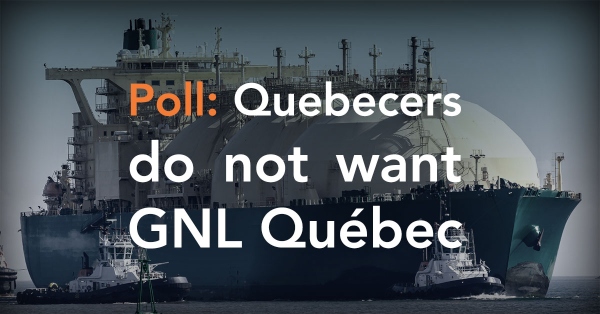 Quebec City, December 2, 2020 – Barely a third of Quebecers are in favour of the GNL Québec/Gazoduq project, nearly a half are opposed to it, and Quebecers are strongly opposed to any government financial support for the gas export project. These are among the results of a province-wide Léger poll conducted from November 20 to 22, 2020, which were released this week.

To the question: "The GNL Québec/Gazoduq project is a project to export gas from Western Canada that would be transported by pipeline across Québec from the Abitibi region to Saguenay, then sent overseas using ships, which would pass through the Saguenay Fjord and the St. Lawrence River. Do you have a favourable or unfavourable view of this project?”, only a third (34%) of respondents said they have a "favourable" view and among this number, only 11% had a "very favourable" view. In comparison, twice as many Quebecers (21%) have a "very unfavourable" view of the GNL Québec project.

Furthermore, 60% of respondents aged 18 to 24 (68% among students) are against the project. Considering the immense ecological and economic debt that GNL Québec/Gazoduq could leave to this generation, it is clear that there is little social acceptability for the project.

"The financial difficulties of this outdated project are no longer a secret and without the help of governments, it could never see the light of day. This is a very clear signal from the Quebec population to our elected officials: fossil fuel projects are not acceptable, even less so when we have to prop them up with public money," state the citizen groups, environmental organizations and student groups who commissioned the survey.

"The historic public participation in the BAPE a few weeks ago was already a good indicator, but the Léger poll allows us to state beyond any doubt that there is no social acceptability in Quebec for this fossil fuel project," they add.

The Bureau d'audiences publiques sur l'environnement (BAPE) saw a record number of submissions to the public consultations on the project, with more than 2,500 briefs submitted. During presentations before the BAPE commission, 80% of the interventions were opposed to the gas export project on the basis of social, environmental and economic concerns.

The Léger survey was commissioned by the Coalition étudiante pour un virage environnemental et social (CEVES), Eau Secours, Équiterre, Greenpeace, Nature Québec and the Regroupement vigilance hydrocarbures Québec (RVHQ). The maximum margin of error for a sample of 1,000 respondents is ± 3.1%, 19 times out of 20.