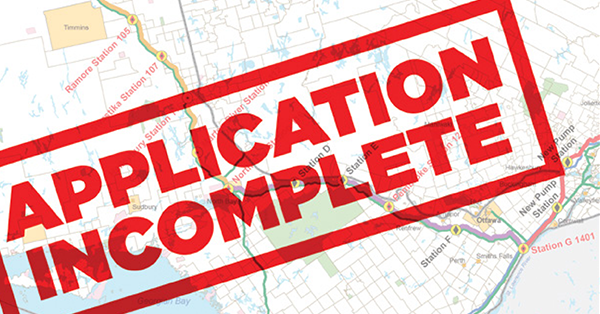 Montreal and Toronto, June 1, 2017 – As the new National Energy Board (NEB) panel reviewing the proposed Energy East pipeline begins to assess TransCanada’s project application, a new report from Environmental Defence, Équiterre and Manitoba Energy Justice Coalition warns that fundamental information is missing about the precise location and/or method of how the pipeline would cross the Ottawa, Saint Lawrence and Assiniboine Rivers.

Without this critical information, TransCanada’s application is incomplete and the NEB’s review of Energy East cannot even begin. The report authors say that the NEB should postpone the scandal-ridden review of Energy East until the federal government has completed the modernization of the pipeline regulator itself, which is currently underway. Barring that postponement, TransCanada’s application cannot be ruled complete until the company provides vital information on these major river crossings, and fills numerous other information gaps.

“It’s alarming that vital information is still missing on how and where Energy East would cross the Ottawa, Saint Lawrence and Assiniboine Rivers,” says Patrick DeRochie, Climate & Energy Program Manager for Environmental Defence. “A spill into a river would be devastating, yet TransCanada can’t tell us how this mega-pipeline would cross three of Canada’s largest and most iconic rivers. Without this critical information, the pipeline application is not complete, and the new National Energy Board review panel must not even begin to assess this risky project.”

New analysis shows that TransCanada has failed to disclose the precise location and method for Energy East’s crossing of the Ottawa River and failed to complete essential feasibility studies for the pipeline’s crossing of the Saint Lawrence River, while omitting a critical recommendation in the French version of a key report. A pipeline rupture in the fast-moving section of the Ottawa River would put the drinking water of downstream First Nations and communities – including Greater Montreal – at risk.

“TransCanada has a worrisome record of pipeline ruptures and it can’t even say how Energy East would cross two of Québec’s most important waterways,” says Steven Guilbeault, Senior Director of Équiterre. “There’s no way the NEB can start this review when TransCanada can’t even provide fundamental details about safeguarding our most precious resource – fresh water.“

TransCanada has also failed to undertake or make public any study of the impacts of Energy East’s proposed crossing of the Assiniboine River near Portage la Prairie, Manitoba. Critical details on the potential impacts and risks of the crossing are missing from TransCanada’s application despite the fact that a spill could contaminate the drinking water of downstream communities, particularly Portage la Prairie and the Long Plain and Dakota Plains First Nations.

“Energy East is all risk and no reward for Manitobans. If TransCanada can’t even tell us how it would keep the Assiniboine safe from a pipeline spill, what does it mean for the thousands of other lakes, rivers, aquifers, and streams the pipeline would cross?” says Nathan Laser, Campaigner for Manitoba Energy Justice Coalition. “The NEB review of Energy East is already plagued by controversy. Ruling TransCanada’s application complete would remove what’s left of the NEB’s credibility.”

The report also calls for the postponement of the review of Energy East until the federal government’s modernization of the NEB is complete. It also demands that TransCanada makes available to the public any and all advanced studies about the crossing of the Ottawa, Saint Lawrence and Assiniboine Rivers, in both official languages.

About Équiterre: Équiterre is Quebec’s largest and most influential environmental organization, with 20,000 members, 200 volunteers, and a staff of 40 people. Équiterre offers concrete solutions to accelerate the transition towards a society in which individuals, organizations and governments make ecological choices that are both healthy and equitable.

For more information or to arrange interviews, please contact: