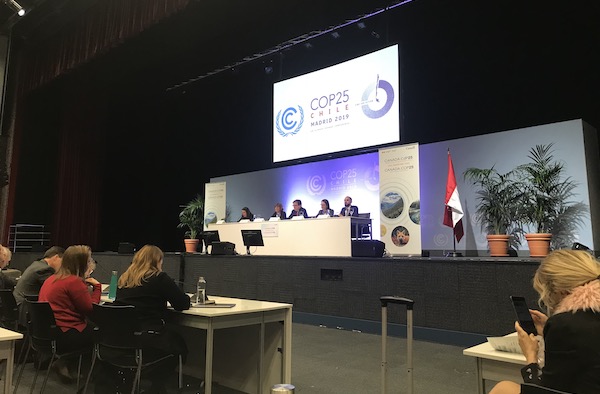 Madrid, December 12, 2019 – Quebec and Canada have been busy over the past few days at the United Nations climate conference, despite the fact that negotiations have been stalled on several issues.

“There is a big disconnect between the demands in the street and what is being discussed in negotiation rooms at COP,” states Caroline Brouillette, Équiterre’s climate change expert, who is following the negotiations in Madrid. “The negotiations do not align with the reality of the climate crisis.”

Which is why, despite the delays in progress on the climate crisis, citizen mobilization – lead by Indigenous Peoples, the South and youth – has been soldiering on, with a peaceful demonstration inside the COP yesterday.

Close to a hundred Quebecers are participating in COP25. Representatives from the government, civil society, youth groups, scientists and businesses have gathered several times during the COP to collaborate and inspire each other in addressing the climate crisis.

Quebec has joined the large number of countries that have announced net zero emissions for 2050. “This is good news in the long term for the climate crisis, but it must be accompanied by intermediate targets and accountability measures in the short and medium terms. Quebec’s current 2030 target is still insufficient to contribute to the worldwide effort to restrict temperature increase to 1.5°C. We hope that the government’s Electrification and Climate Change Plan (ECCP), which will be launched in the winter of 2020, will correct this and be an ambitious and robust action plan for increasing the province’s climate ambition,” states Caroline Brouillette.

“Canada reiterated its commitment to legislating net zero emissions in 2050, with 5-year intermediate objectives, to putting in place a law on just transition and to strengthening Canada’s Paris Agreement target for 2030. We are anxious for action, but these commitments are in the right direction to establish a framework that will allow Canada to go further in addressing the climate crisis,” states Caroline Brouillette. “We expect Canada to announce a new GHG emissions reduction target for 2030 before the next COP, to be integrated into a legislative framework, aligned with the science and reflecting the historic responsibility of the country.”

Now is the time to show leadership on the climate crisis

There are now 80 countries that intend to enhance their emissions reductions targets for COP 2020, representing 10.5% of global GHG emissions. Canada and large emitters now need to join that list and get to work.

According to the United Nations Emissions Gap Report 2019, global forecasts of oil, gas and coal production into 2040 in major producing countries are inconsistent with the goals of the Paris Agreement. Canada, along with China, the United States, Russia, India, Australia and Indonesia, is among the world's top nine producers of CO2 emissions from fossil fuel extraction.

“Canada needs to phase out fossil fuels, while ensuring a just transition for workers and all those who will be affected, as well as human rights and Indigenous rights,” explains Caroline Brouillette. “For climate justice, social justice and future generations.”

For information and interview requests