The pan-Canadian framework on clean growth and climate change: the beginning of a new era of collaboration in the fight against climate change in Canada 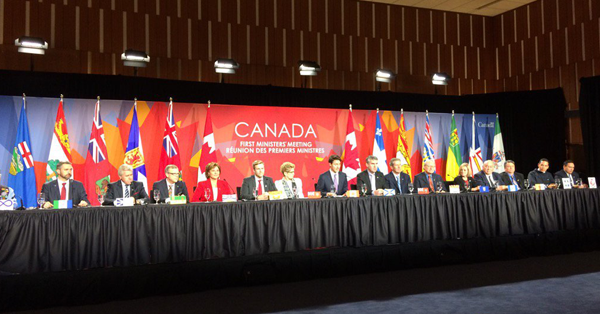 The climate plan follows from the commitment made last March through the Vancouver declaration and represents a milestone towards meeting, and surpassing, Canada’s GHG emissions reduction target of 30% reduction below 2005 by 2030.

“Today’s climate plan marks the first step towards reaching our target, whereas almost all sectors of the Canadian economy are now required to deliver GHG emissions reductions” stated Annie Bérubé, director of governmental relations at Équiterre. «Now, rapid implementation will be key and will require that will fill some policy gaps in the plan” added Ms. Bérubé. “We note that the transportation sector and agriculture could contribute much more ambitious GHG emissions reduction with additional policies. Electrification of transport is particularly timely given governments’ investments to support clean electricity generation in Canada” concluded Ms. Bérubé.

“While all sectors of the Canadian economy are now required to go on a GHG emissions diet, we know emissions from oil and gas sector will continue to grow in Canada, according to the estimates released today» stated Steven Guilbeault, principal director at Équiterre. «This climate plan will result in reduced oil and gas consumption domestically, while Canada continues to export more of its carbon pollution overseas. This is a failure of climate and energy policy coherence in Canada and threathens our credibility as a champion of climate change internationally.” added Mr. Guilbeault.

The pan-canadian framework revealed today is in addition to existing climate policies already announced by the provinces including the new climate plan in New Brunswick, Alberta’S climate plan, the elimination of coal-fired electricity in Ontario and the Quebec-Ontario cap-and trade system.

The pan-canadian framework also reinforces recent announcements by the federal government to regulate HFC emissions, a performance standard for coal-fired electrify plants, the development of a national low carbon fuel standard and the new pan-canadian carbon pricing mechanism. The sums of all these measures will change the direction of the curve of GHG emissions in Canada towards the necessary energy transition and clean growth.

The main components of the climate plan include:

Climate measures already in place are responsible for 89 Mt of CO2 equivalent by 2030, whereas the measures announced in the plan today will yield an additional 86 MT of reduction by 2030.