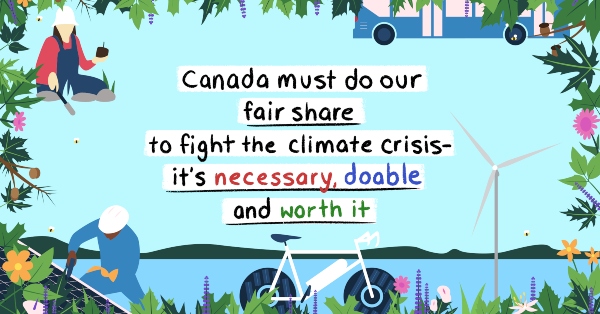 Ottawa, Ont. - New research released today by seven environmental organizations shows that Canada can take much more ambitious climate action between now and 2030 while maintaining a thriving economy and reducing energy costs for Canadians. The research, undertaken by renowned energy modellers from EnviroEconomics and Navius, shows that Canada can achieve 60 per cent GHG emission reductions by 2030, with a smart mix of policies and regulations.

“Doubling our climate target is necessary, worth it and, most importantly, doable,” said Dale Marshall, National Climate Program Manager, Environmental Defence. “It will be hard work, but Canadians are up for it, and the benefits will be healthier communities and more, stable, green jobs.”

In the coming months, Canada and other nations are expected to strengthen their climate change commitments under the Paris Agreement. U.S. President Biden’s Leaders Climate Summit, to be held this Earth Day, is the first opportunity for Canada to show it wants to raise its ambitions and do its fair share to avoid climate catastrophe. Canada’s fair share target has been assessed as 60 per cent GHG reductions below 2005 levels by 2030. Its current commitment is to reduce GHGs by 30 per cent over this decade.

“We can't negotiate with the mathematical logic of the global carbon budget. If we keep polluting at today's levels we have less than a decade before we cross into global temperature increases that will cost lives and make us all less safe,” said Louise Comeau, Director Climate Change and Energy, Conservation Council of New Brunswick. “The transition to a cleaner economy is the legacy we leave to future generations, forever. Let's embrace the challenge."

The modelling research shows that achieving deep reductions will require a combination of much more stringent regulations and an escalating carbon price for all major sectors. The oil and gas sector--Canada’s largest and fastest growing source of carbon emissions--will have to shrink its production and emissions.

“It’s time Canada got serious about our oil and gas problem,” said Émile Boisseau-Bouvier, climate policy analyst at Équiterre. “Oil and gas companies are responsible for more than one-quarter of Canada’s emissions, but less than 1 per cent of Canada’s jobs. Phasing out fossil fuels is not only a necessary part of addressing climate change, but it will improve other issues like unhealthy people and communities, and environmental degradation. ”

The modeling suggests that the economy and investment continue to grow significantly, but at a slightly slower pace than business-as-usual.

A backgrounder explaining the modeling research can be found here.