23rd United Nations Conference on Climate Change (COP23): will this COP be marked by Talanoa?

Talanoa: a word used in Fiji and elsewhere in the Pacific to denote transparent, participatory and inclusive dialogue. A dialogue that is used to share ideas, express empathy and pass along know-how through the telling of stories.

This is how COP23 President Frank Bainimarama, Prime Minister of Fiji, envisages the discussions that are kicking off this week in Bonn, Germany, and I have to tell you, after spending nearly a quarter century taking part in these meetings, I for one would certainly welcome such a change of tone.

Science is telling us something

Sadly, 2017 served as yet another reminder that we are already knee deep in the climate change era. Here are some troubling facts that the current science is telling us:

Already in Paris in 2015, we knew that the emission reduction objectives proposed by the international community would not be enough to meet the ultimate aim of the Paris Agreement, namely to keep the increase in the global temperature to less than 2° Celsius and possibly as low as 1.5° by 2100.

A 2015 analysis by the international organization Climate Action Tracker, a group of scientists assessing the climate change performance of various countries, states that the Paris Agreement commitments by the various countries, if met, would make it possible to avoid nearly 1° Celsius of warming. They concluded that without the Paris commitments, the planet would be headed for an increase of 3.6° Celsius, as opposed to an increase of about 2.7° Celsius if the commitments were met. Climate Action Tracker characterized Canada’s plan as “insufficient” to reach the Paris objectives.

You might say that 2.7° Celsius of warming is a lot better than 3.6, and you’d be right! But it is still far more than the 1.5-2° Celsius limit set in the Paris Agreement.

The aim of the dialogue initiated by the Conferences of the Parties (COP) is precisely to get the Paris Agreement signatory countries to adopt a more ambitious approach, and Bonn is where this approach must begin. The negociations on the additional reduction measures must end no more than two years from now, so that the new reduction objectives can be integrated in time for the countries to be able to put them in place.

US State Secretary John Kerry signs the Paris Agreement with his grand-daughter in 2016.
© US Department of State - Flickr

Often an afterthought in international negotiations, adaptation is a priority issue for developing countries, since they emit little in the way of greenhouse gas. For example, the least developed nations have a combined population of about a billion people, but produce only 5.5% of the world’s emissions. Canada, with barely 36 million inhabitants, is responsible for 2.2% of these emissions!

And so the challenge for these countries hardest hit by climate change is not so much to curb emissions but to adapt to these increasingly severe impacts.

They therefore require technologies, infrastructure and know-how to – in the case of Africa, for example – help their farmers better contend with ever-worsening drought. They have to do a better job training their public servants, representatives of non-government organizations (NGOs) and the population at large. Plus, they need cash. According to a number of major international NGOs, these countries’ adaptation needs come to about $100 billion a year, an amount that the world’s industrialized nations pledged to provide as of 2020 when they met in Copenhagen in 2009. And yet, eight years later, several key aspects remain fuzzy: Will the money take the form of loans or grants? Will the money come from the private sector, the public sector or both? Will the money come from UN funds, bilateral agreements, or… (and so on and so forth).

The phrase “loss and damage” refers to damage and irrecoverable loss due to the impact of climate change.

What does “irrecoverable” mean?

One of Fiji’s neighbours, the Maldives, held a Cabinet meeting underwater (yes, you read that right!) to illustrate the impact of rising sea levels on island countries like theirs. 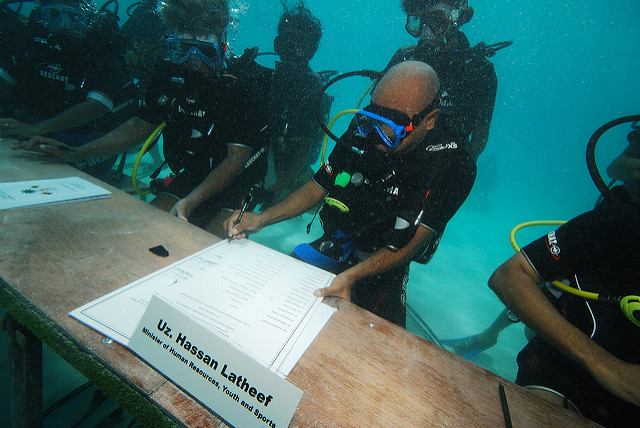 Other examples include several islands in the Gulf of Mexico this past summer, at a time when the Caribbean was barely recovering from Irma but was having to brace itself for Maria’s arrival a few weeks later. At this pace, how much longer can these islands withstand the impacts?

Indeed, a number of these countries are expected to disappear in the coming decades.

They will need to relocate and build new infrastructure for entire populations, but then there is the matter of finding places in which to settle these climate refugees. It’s quite the conundrum!

The focus of “loss and damage” is to discuss and eventually agree on financial mechanisms enabling these populations to rebuild their lives elsewhere.

This has been just a glimpse of some of the issues that will be broached during COP23, which will run until November 17.