The scourge of plastic pollution

Plastic has become one of the key environmental issues of our time. Excessive production, insufficient recycling, overuse…plastic is a blight upon the environment.

And things don’t stand to get much better anytime soon: by 2050, there will be more plastic in the oceans than there are fish, according to a claim made by UN Secretary General Antonio Guterres on World Environment Day (June 5, 2018).

According to the World Economic Forum, plastic-related output has grown 20-fold between 1964 and 2014 (see graph below). The plastic industry continues to grow, and our environment is paying the price. Plastic alone accounts for 10% of all the earth’s waste. 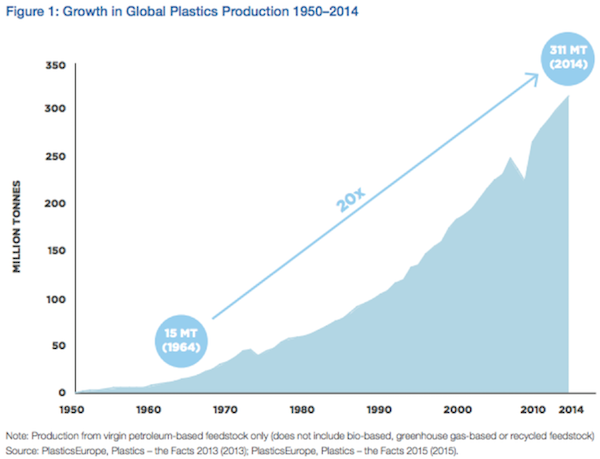 Recent studies show that some 8 million tonnes of plastic end up in our oceans every year. This ecological catastrophe has produced a phenomenon known as the “seventh continent of plastic,” a gigantic accumulation of floating waste in the North Pacific. Straws and stir sticks make up much of this swirling mass.

There are numerous ways in which the plastic industry impacts the environment, including greenhouse gas emissions caused by waste production and incineration, as well as the degradation of ecosystems (such as the oceans). Every year, one million seabirds and 100,000 sea mammals perish because of the massive presence of plastics in our oceans, according to the UN. Six hundred marine species are affected, 15% of which are in danger of extinction. 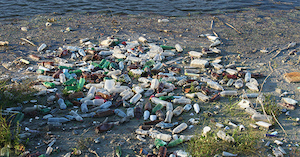 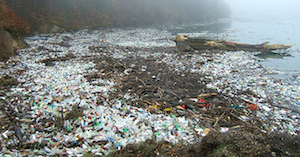 When it comes to the recycling of plastics, Canadians are facing some harsh realities. According to Environmental Defence, a mere 11% of plastic waste is recycled in this country. Plastic straws, that take between 200 and 400 years to decompose in nature, aren’t even recycled. On a positive note, we are currently seeing increasing numbers of establishments like Starbucks, McDonald’s and A&W committing to doing away with plastic straws.

JOIN THE MOVEMENT AGAINST THE OVERUSE OF PLASTIC!

Plastic cups, bags, straws and packaging are just some of the many examples of mostly single-use products that are fast becoming an unsustainable burden on the environment. But all is not lost! As citizens of the planet, each one of us can act to counter this scourge, one action at a time. Here are some tips from Équiterre on what you can do starting today:

1. Use reusable bottles and cups!

No need to buy a plastic water bottle when it’s so easy to just bring your own. It’s better for the environment, it costs less and it’s more practical. Even at a coffee shop you can ask to have your beverage served to you in your own mug. If you don’t like the idea of a bottle floating in the ocean for 450 years, keep one in your bag at all times!

Four minutes of use for a product that will take 400 years to disappear is food for thought. So make the choice to go completely strawless! And if you really do need to use a straw, opt for a reusable one (they come in bamboo, stainless steel and bombilla).

3. Bring your own bag to the store!

Next to your bottle (and reusable straw), make room for a bag. Whether it’s made from recycled plastic, cloth or paper, the best bag is a reusable one.

When you go shopping, choose unpackaged products or products wrapped in reusable (or better yet, biodegradable) packaging. And shop at stores that offer you this choice. 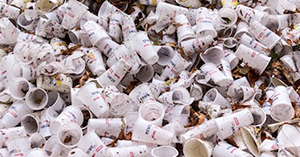 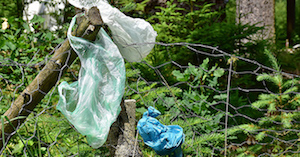 To learn more about recycling plastic or any other material in your region, visit the Recyc-Québec platform (in French only).