Montreal, December 12, 2017 - Twenty schools and child care services in Montreal and Montérégie took part in the innovative Schools Take Root project last fall, selling local, organic vegetables to raise funds for their activities. This campaign was created in Montreal last year thanks to the collaboration of several partners via the Système alimentaire montréalais (SAM). This year saw the initiative expand to Montérégie.

In total, 1,530 baskets of local, organic vegetables were sold by six farms in Équiterre’s network of local family farmers (the 13,000 kg of local, organic vegetables sold brought in nearly $37,000 for these farmers). For their part, schools were able to raise an additional $9,000 to finance initiatives such as teaching gardens, cooking workshops, schoolyard makeover projects and educational activities and to procure teaching materials in schools and child care services in these two regions. 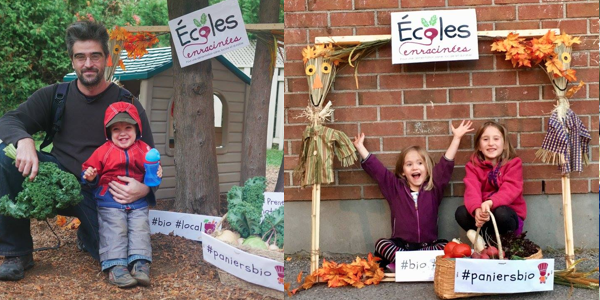 See the inspiring deliveries in images on the Facebook album.

In addition to raising funds for the participating establishments, this campaign generates positive results all-round :

Participating parent, École Saint-Jean-de-Brébeuf, Montreal : “The very next day, my son insisted we make one of the recipes suggested by the farmer. My daughter wanted to use the Algonquin squash because it tied in with her history class.”

Participating parent, École Saint-Denis, Saint-Denis-sur-Richelieu: “Great participation by the students during the delivery! They had prepared a healthy snack to welcome the parents and were making baskets! So much enthusiasm!”

Participating parent, Académie des Sacrés-Coeurs, St-Bruno-de-Montarville: “When my daughter saw the eggplants, she was thrilled! She also asked questions about the daikon.”

To see the list of participating schools and child care services.

For information or an interview with a school, family farmer or Équiterre :
Camille Gagné-Raynauld, relations médias Équiterre
514 605-2000, cgraynauld@equiterre.org