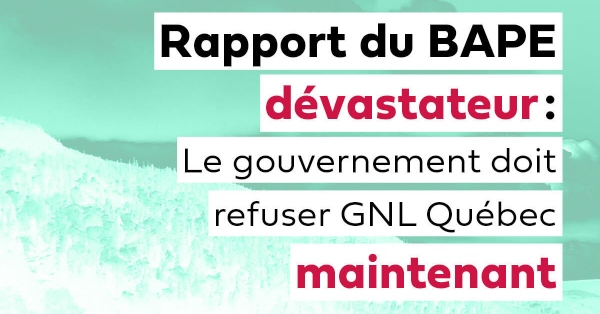 Montreal, Quebec, Saguenay, Mauricie, Rouyn-Noranda, March 24, 2021 – A group of environmental, citizen, community, health, student and union groups are reacting positively to the release of the Bureau d’audiences publiques sur l’environnement (BAPE, Québec’s environmental assessment board) report on the proposed fossil gas liquefaction plant in Saguenay. However, the groups are concerned about the comments made by provincial environment minister Benoit Charette, who implied that he will work with the proponent until the government makes its final decision. The groups are demanding that the Legault government follow all the BAPE recommendations and immediately and categorically reject the GNL project.

The government must reject the project now

According to the groups (see signatories below), “Minister Charette has all the information and documentation necessary at his disposal to reject this project on science-based arguments.

The Legault government’s decision on this project will determine the Coalition Avenir Québec’s (CAQ) credibility on its commitment to fight climate change. The groups explain: “We are concerned that Minister Charette will not reject the project and wants to work with GNL Québec. The CAQ needs to end the debate by making a decision on this project so we can begin to work together to build a just and green recovery that will benefit all Quebecers, including those in the Saguenay Lac-Saint-Jean region.”

Postponing the final decision will only serve to polarize the social climate in the impacted regions. While the CAQ delays its decision, it is losing time by not studying other projects that would be much more beneficial to our regions and future generations. Think of the ecotourism, green aluminum, public services or knowledge economy sectors. The government needs to start working on real projects for the future, rather than gambling on projects from the past.

The groups are pleased that the Panel’s final report included the full cycle of GHG emissions of the project, from its extraction in Western Canada to its combustion in international markets, and that it concluded that the project would result in a net addition of global GHG emissions.

As denounced by all the environmental groups in Québec, as well as 648 scientists, the BAPE alerts the government to the enormous quantity of GHGs that would be emitted by the company. The commission is of the opinion that “the government cannot expect a net reduction in GHGs at the global level. Rather, the government’s decision-making should be based on a net addition of GHG emissions. The panel estimates the project’s lifecycle GHG emissions at approximately 45.5 million tonnes of CO2 equivalent per year (Mt CO2 eq.), a conservative analysis considering that many groups and scientists have estimated emissions of over 50 million Mt CO2 eq. per year. “With such a disastrous carbon footprint, the Legault government has no choice but to reject the GNL Québec project,” explain the groups.

In addition, the report explains that “there is no guarantee or way to ensure that the liquefied natural gas (LNG, or GNL in French) produced by the liquefaction complex would actually serve as a substitute for more polluting fuels in the targeted export markets.” The commission argues that “the development of new LNG trading infrastructure could slow down the energy transition in the markets targeted by the project.” It is therefore the very reason for the project, namely the potential reduction in GHGs arising from countries switching from coal-fired to gas-fired power plants, that the BAPE bases the necessity of rejecting the project. Moreover, several studies are clear that gas produced by hydraulic fracturing causes significant amounts of fugitive methane emissions. Methane is a greenhouse gas 86 times more potent than CO2, making its climate balance as bad as coal. As raised by health experts during the BAPE, this unconventional method of extraction poses numerous risks to communities’ health and well-being, including cancers, lung disease and fertility problems.

The BAPE hearings for this project witnessed record participation with 91% of the 2,800 filed briefs opposing the project, it is completely inconceivable to consider that the project has earned its social license. In addition to the briefs, there have been nine demonstrations in the Saguenay-Lac-Saint-Jean, North Shore and Abitibi-Témiscamingue regions; a petition has collected more than 121,000 signatures to date; and more than 648 scientists, including 250 health professionals, have taken a stand against the project. All this, plus the fact that 56 student associations representing more than 350,000 students have mobilized against the project, while the province’s three opposition parties, which earned 58% of the vote in the last election, are also against the project.

Furthermore, according to a recent Léger poll, the majority of Quebecers reject the project, with 52% of Quebecers saying they are against it compared to only 27% in favour. “The Québec population could not be more clear: GNL Québec does not have the benefit of a social license. The most recent national poll on the subject even shows that the more people know about GNL, the more they oppose the project. Opposition will continue to grow as time goes on and the project will never have the social license the government is looking for to approve the project,” said the groups.

A bad project for the economy and taxpayers

GNL Québec is struggling to find investors for its outdated project and the economic benefits are likely to be far below what was announced. While the project proponent has dangled the promise of $9 billion in investments, only 33% of this amount would be invested in Québec during the construction phase and only 25% to 30% during the project’s operation. Despite the company’s claims, this is not set to be the largest private investment project in the history of Québec. The project is also unlikely to be profitable, considering that global gas markets are already oversaturated due to a proliferation of projects similar to GNL Québec.

In addition, the project would lead to an additional 2.5% increase in hydro rates for 2030 and a cumulative shortfall of nearly $1.5 billion for Hydro-Québec for the 2027-2030 period. For the year 2030 alone, the shortfall for Hydro-Québec could total close to $380 million. This would only be the tip of the iceberg, as the shortfall would continue to accumulate over subsequent years.

A risk for belugas

The Commission recognizes that “the addition of 400 LNG tanker trips on the Saguenay would almost double the noisy periods” and that “the evaluation of the impacts of maritime traffic on the beluga population of the St. Lawrence Estuary requires the consideration of all maritime activities in its critical habitat, including the increase in traffic that could be generated by other port development projects upstream in the St. Lawrence. The groups agree with the BAPE commission that the precarious state and current “endangered” status of the beluga population means that any additional stress “must be considered a non-negligible risk to its recovery and survival.” In addition to the negative impacts on tourism and on local communities of having an LNG tanker constantly present in the fjord for at least 25 years, there is a very real risk of seeing the St. Lawrence beluga, an emblematic species on the verge of extinction, disappear.

Conclusion
In light of the BAPE report, it is clear that GNL Québec will never be able to meet the conditions set by the government, whether it is to contribute to reducing global GHG emissions or to earn the necessary social license. The government must take note of this and categorically reject the project as soon as possible.