Équiterre celebrates the entry into force of Paris Agreement 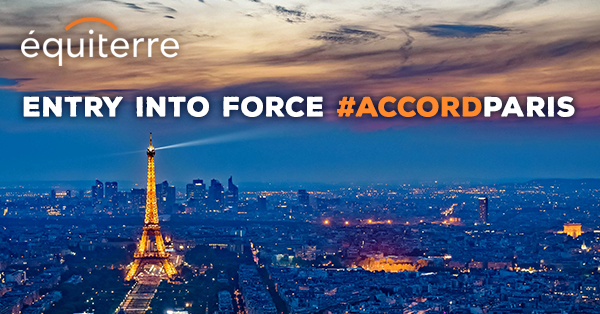 Montreal, November 4th, 2016 - Équiterre celebrates today the official coming into force of the Paris climate agreement and reveals its policy recommendations for its implementation in Canada. There are currently 94 countries representing more than 66% of global emissions that have ratified the Paris Agreement.
This rapid ratification of the Paris climate agreement, not even one year old, demonstrates the unprecedented level of international cooperation and underscores the global sense of urgency attached to our fight against climate change.

Signatories to the agreement will start meeting regularly at the United Nations to discuss how to strengthen their individual climate pledges over time and work toward their agreed-upon goal of keeping global warming below 2°C. Governments will also have to regularly report and review their progress on emission reduction to the UN. Those reporting mechanisms will be discussed at the Meeting of the Parties to the Paris Agreement to take place in Marrakech in November. Équiterre will be there.

Canada’s through the ratification process, has submitted its greenhouse gas (GHG) emission reduction target of 30% reduction below 2005 levels by 2030. However, in order to meet our commitment to the international community, Canada will have to do better in terms of emissions reduction. Parties to the Paris Agreement can submit a revised emission target at any time, and increased level of ambition is actually a commitment of the Parties to the Paris Agreement.

Équiterre also wishes to remind everyone that we still do not have a plan in Canada on how we will meet our Paris target. This early ratification by Canada now puts the onus on federal, provincial and territorial governments to craft an ambitious climate plan to reduce emissions in Canada. The pancanadian framework on clean growth and climate change will be announced in December.

Équiterre has been working closely with all levels of governments over the last months to ensure we adopt new policies to reduce GES in all sectors of the economy.
You can view a summary of Équiterre’s policy proposals for the pancanadian framework on climate change here : http://bit.ly/EquiterreParisAgreement

For further information or media requests: