Équiterre will be at COP26: high expectations for Canada and Quebec 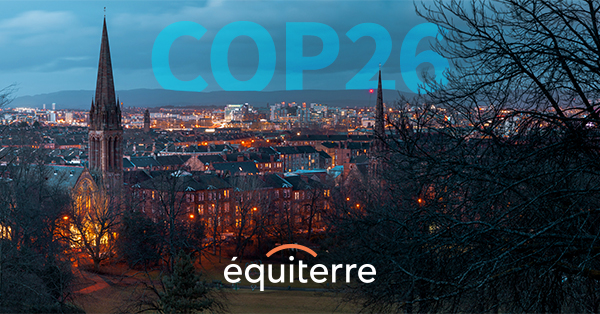 MONTREAL, October 28, 2021 - Équiterre will be in Glasgow from November 5 to 12, 2021 for the 26th Conference of the Parties (COP26) to the United Nations Framework Convention on Climate Change (UNFCCC) and will be lobbying the Canadian and Quebec governments to concretely increase their ambition and commitments in the international fight against the climate crisis.

"Following on the heels of another summer of extreme weather events, an alarming report by the Intergovernmental Panel on Climate Change (IPCC) and a warning from the International Energy Agency, this COP will be crucial in many ways, and Équiterre will have privileged access to the negotiations in order to relay information to other Canadian organizations, the media, civil society and the general public," says Émile Boisseau-Bouvier, a climate policy analyst who will be on hand until the end of the negotiations.

"Because of the current global health situation and the lower vaccination rates in developing countries, COP26 is unfortunately shaping up to be especially inequitable and less safe than it would normally be. It is disappointing and shocking to see that the logistics of the conference will not allow maximum safe participation for some of the countries that will be - and already are - among the most affected by the climate crisis," adds mobility analyst Andréanne Brazeau, who will also be in Scotland.

Équiterre will be closely monitoring progress on the major objectives of COP26. Below are some that are of particular interest to us:

1) It is absolutely critical that countries raise their climate ambition, both in terms of targets and action plans, in order to keep in line with climate science and limit warming to 1.5 degrees Celsius. This increased level of ambition is one of the core mechanisms of the Paris Agreement.

2) Many countries, including Canada, need to do better on the commitment of $100 billion a year in climate finance, which was made during the Copenhagen negotiations in 2009. This funding is intended to support developing countries' climate change mitigation and adaptation efforts, since historically, developed countries have a greater responsibility for the current climate crisis.

3) One of the key objectives of COP26 remains the implementation of Article 6 of the Paris Agreement, which provides for greenhouse gas emissions trading systems among countries. Countries are currently in agreement on the principle, but not on its implementation.

4) The science is clear, and states no longer have a choice if the most severe effects of irreversible climate change are to be avoided: they are required to implement a timed and costed plan for a rapid phase-out of fossil fuels that ensures a just transition for the workers and communities involved.

Équiterre has more specific expectations of the Canadian and Quebec governments while at COP26, on transportation, agriculture and the energy transition.

"Transportation is one of the most GHG-emitting sectors in Canada and in Quebec. If we don't act decisively on this front, we will negate all our efforts elsewhere. So we will be watching to see what happens in this area at COP," explains Andréanne Brazeau.

"What’s more critically important than our ability to feed ourselves? Even if agriculture is not directly addressed in the international climate negotiations, Équiterre will be closely following the work being done on the issue, as it is directly linked to climate conditions. We need to provide resources and support to our farmers to allow them to increase their resilience and their ability to adapt to their new reality in a changing climate," adds Émile Boisseau-Bouvier.

Consult our complete web file on COP26 to know our demands.

To organize an interview during COP26: