Launch of the Land Use Planning Horror Show: Environmental groups are tired of the same old film 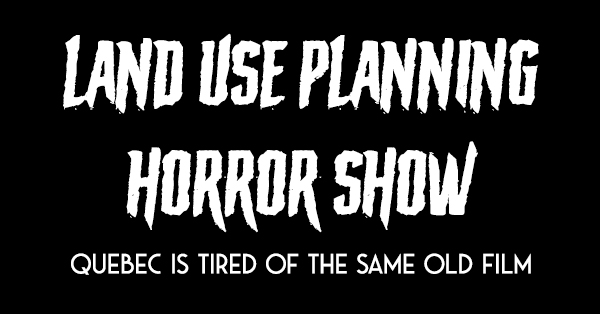 The initiative is being launched at a time when the government of Quebec is holding a National Conversation on Land Use Planning, which will result in the adoption of a strategy in April 2022.

The Minister of Municipal Affairs and Housing stated last year that [translation] "we need to bring in a Quebec land use plan that is worthy of the 21st century" and that "we need to put the brakes on urban sprawl."

"In the context of a climate and biodiversity crisis, at a time when we should be doing everything possible to protect our natural and agricultural environments, land use planning in Quebec is more often than not a source of problems rather than solutions. Every week, we see examples of land management done on a piecemeal basis and for the benefit of private interests rather than the collective interest, all over the province. If the consequences were not so horrifying, we could call it a comedy of errors," state the groups involved.

It is a veritable land use planning horror show: from new construction in flood zones, to the proliferation of highways, the dereliction of built heritage, the decline of neighbourhood schools and the destruction of agricultural land, green spaces and natural areas.

A scenario that keeps playing on repeat

“Quebec has a vast and rich territory, but it is not taking the necessary steps to adequately protect it. It is being fragmented, neglected and destroyed. It is high time to combat urban sprawl and its many serious consequences for our health, our environment, our safety and our collective well-being. We unfortunately keep on seeing the same scenario being played out over and over again, with outcomes that are often predictable,” add the groups.

For the 7 organizations, any future national strategy on urban and regional land use planning must be ambitious and must mobilize all stakeholders, both private and public.

The protection of our territory, our natural environments and agricultural land, our communities and our heritage must absolutely become the protagonists in the upcoming episodes.