Mission accomplished for the CQDE and Équiterre: The Supreme Court of Canada rules in favor of carbon pricing 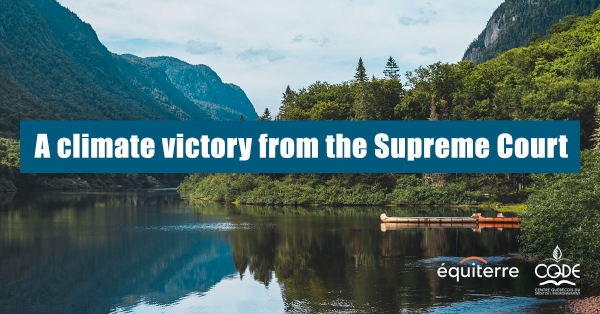 This decision follows challenges by the provinces of Alberta, Ontario, and Saskatchewan to the Greenhouse Gas Pollution Pricing Act. These provinces argued that the federal government did not have the authority to set a Canada-wide price on greenhouse gas (GHG) emissions and that the pricing imposed by Canada is in fact a "disguised and unconstitutional tax."

"We’re pleased that the Supreme Court has ruled that the carbon pricing system respects jurisdictional balance and that it is a necessary safety net. In so doing, the Supreme Court has recognized the complementary roles that the federal and provincial government must play to reduce greenhouse gas emissions," explains David Robitaille, lawyer for the CQDE and Équiterre in this case.

"The legal outcome of this case is a relief and a clear victory for the climate. The court recognizes that climate change knows no borders and that a province's inaction on GHG pricing can have serious interprovincial consequences. Furthermore, the Court recognizes that climate change has already had particularly serious impacts on Indigenous peoples," says Geneviève Paul, Executive Director of CQDE.

"The message is clear: the provinces and the federal government must work together. We hope that this decision will serve as a springboard for real collective work to address the climate crisis and that governments will take the necessary additional steps necessary, starting with supporting and improving Bill C-12 so that Canada has a real climate legislation, " she added.

"This decision ensures that the federal and provincial and territorial carbon pricing regimes work together harmoniously. It is also a victory for Quebec, as all legislation will now be able to move in the same direction, thus guaranteeing the success of the system. Nevertheless, we must remember that minimum carbon pricing is an important tool in the fight against the climate crisis, and that it is now up to the provinces and territories to show more ambition and leadership," says Émile Boisseau-Bouvier, climate policy analyst at Équiterre.

CQDE and Équiterre intervened before the Supreme Court last September to ensure that the federal carbon pricing system, a minimal measure in the fight against the climate crisis, would be maintained.

History of the file

In April 2019, following challenges to the Greenhouse Gas Pollution Pricing Act by the provinces of Saskatchewan and Ontario, the respective provincial courts of appeal both concluded that the federal government's carbon pricing was valid. Both provinces are now appealing to the Supreme Court.

At the same time, Alberta has also asked its court of appeal to rule on the validity of the federal legislation. Unlike the other two aforementioned courts, the Alberta Court of Appeal took the position that the federal legislation is unconstitutional. The appeal of this opinion was also heard by the Supreme Court of Canada, along with the other two.