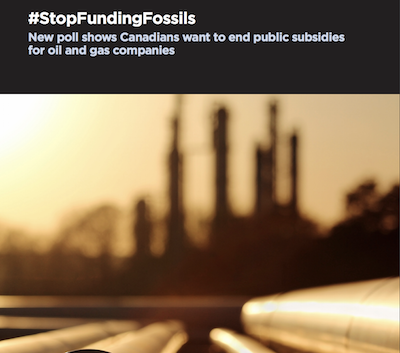 Toronto, Ont., June 4, 2018 – Amidst the federal government’s decision to purchase Kinder Morgan’s risky Trans Mountain pipeline, a new poll shows that a large majority of Canadians are opposed to the use of public money to subsidize oil and gas companies and want to eliminate fossil fuel subsidies.

In our new report, polling data from Ekos shows that Canadians want transparency on how much public money is supporting fossil fuel companies; that Canadians understand the environmental and climate benefits of ending these subsidies; and that they are more likely to support political parties that promise to phase them out.

“Canada has a longstanding commitment to phase out fossil fuel subsidies, which have been called ‘the world’s dumbest policy’,” said Patrick DeRochie, Climate & Energy Program Manager at Environmental Defence. “Now we have data showing that ending these subsidies is overwhelmingly popular. Rather than buying a tar sands pipeline, now is the time to turn words into action and lay out a roadmap to get rid of these handouts to climate polluters.”

The polling data shows Canadians want an end to fossil fuel subsidies in virtually every part of the country and across gender, age, region, education and income. The data makes this clear:

The strong public support for phasing out fossil fuel subsidies provides the federal government with an opportunity to show international climate leadership as Canada hosts the G7 this week. An international report card released today shows that Canada has made progress by restricting government support for fossil-fuel based electricity, but ranks last in the G7 for its continued support for oil and gas production. The report card also ranks Canada second last for its lack of transparency on fiscal support for fossil fuels.

“This week’s G7 is Canada’s time to shine on the international stage,” says Catherine Abreu, Executive Director of Climate Action Network Canada. “There’s clear public support for ending public subsidies for oil and gas companies. At Charlevoix, we need to see Canada announce its peer review of fossil fuel subsidies and lead its G7 partners in delivering a roadmap to phase-out these subsidies by 2025.”

“Canada has committed to phase out inefficient fossil fuel subsidies by 2025,” said Philip Gass, Senior Policy Analyst, Energy, IISD. “These poll results show there is emerging public consensus that fossil fuel subsidies need to be reformed and removed. It’s time for Canada to lay out a public timeline for meeting its 2025 commitment.”

“Canadians clearly want an end to subsidies for the fossil fuel industry, as promised by the federal government, but the Kinder Morgan bailout is yet another handout that takes us in the wrong direction,” says Alex Doukas, Program Director at Oil Change International.

The polling was conducted in March 2018 by Ekos and commissioned by Environmental Defence, Climate Action Network, Équiterre, the International Institute for Sustainable Development, and Oil Change International. The poll sampled 1,065 Canadians and has a margin of error of +/- 3.0 per cent, 19 times out of 20.

The full report can be accessed here.

About ENVIRONMENTAL DEFENCE (environmentaldefence.ca): Environmental Defence is Canada’s most effective environmental action organization. We challenge, and inspire change in government, business and people to ensure a greener, healthier and prosperous life for all.

About ÉQUITERRE (equiterre.org): Équiterre is the largest and most influential environmental organization in Quebec, with over 180,000 supporters, 22,000 membres, 200 volunteers and 40 employees. Équiterre offers concrete solutions to accelerate the transition towards a society in which individuals, organizations and governments make ecological choices that are both healthy and equitable. By 2030, Équiterre, in partnership with local communities, will have contributed to the development of public policies as well as civic and business practices that lead to a low-carbon economy and an environment free of toxic substances.

About INTERNATIONAL INSTITUTE FOR SUSTAINABLE DEVELOPMENT (iisd.org):The International Institute for Sustainable Development (IISD) is an independent think tank championing sustainable solutions to 21st century problems. Our mission is to promote human development and environmental sustainability. Through research, analysis and knowledge sharing, we identify and champion sustainable solutions that make a difference.

About OIL CHANGE INTERNATIONAL (priceofoil.org): Oil Change International is a research, communication, and advocacy organization focused on exposing the true costs of fossil fuels and facilitating the coming transition towards clean energy.

For more information or interview requests :