Over 110,000 signatures against the ‘GNL Québec’ complex 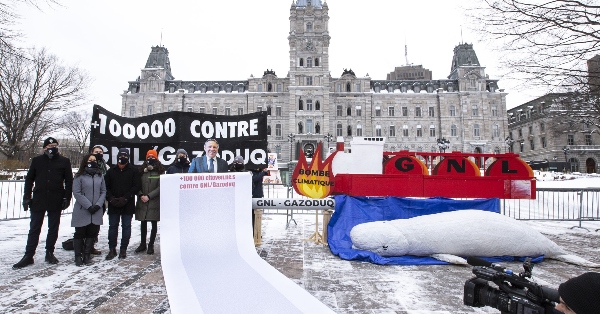 Quebec City, December 8, 2020 – Today, citizen groups and environmental organizations presented elected officials in the National Assembly with a petition against GNL Québec. Signed by more than 110,000 people, the submitted petition is further proof that the project has no social license, the groups say.

“With over 110,000 signatures, this is one of the largest environmental petitions in Quebec’s history. Also, let us recall the historic citizen participation in the BAPE this fall and the fact that 80% of the presentations during this BAPE were against the project, not to mention the citizen mobilization in Saguenay including 8 protests, 15 citizen assemblies and 17 conferences and presentations in only two years. We refuse to see the Saguenay Fjord transformed into a highway of supertankers and we will not sit idly while the beluga disappears,” explains Adrien Guibert-Barthez, co-spokesperson of Coalition Fjord.

“It was citizen groups in Abitibi-Témiscamingue and Saguenay-Lac-Saint-Jean that initially launched the petition over two years ago. Citizen mobilization against the project has been in full swing in these two regions for more than two years now, as well as in Mauricie and the North shore. Let us recall that a poll conducted last week shows that nearly half of the population is opposed to the project, against only a third of the population in favour. “It is our communities that would be the most affected if the project sees the light of day. We don’t want a pipeline that fractures more than 780 km of land and damages thousands of streams. We will continue to fight against GNL Québec until this destructive project is definitively abandoned,” says François Gagné, spokesperson of the Rouyn-Noranda Anti-Pipeline Coalition.

The groups point out that the National Assembly unanimously adopted motions supporting the Paris Accord back on November 16, 2016 and declared a climate emergency last year on September 25, 2019. “This gas project can only exist and be profitable if countries abandon the Paris Accord, and that is something Quebecers will never accept. MPs cannot recognize the climate emergency on one hand and support liquefied natural gas as a supposedly transitional energy on the other knowing that the project would result in annual global emissions in excess of 50 million tonnes of GHGs. That’s the equivalent of over 10 million vehicles per year polluting for 25 years. The government must reject this project, which would be a disaster for the climate and for which there is no social acceptability,” says Patrick Bonin of Greenpeace Canada.

The text of the petition mentions not only the potential impacts of the project on the global climate, but also on Quebec’s biodiversity. “GNL Québec would destroy and fragment the habitat of several species, including threatened or vulnerable species such as the wolverine, Blanding’s turtle, the Canada warbler, bats and the St. Lawrence beluga whale, an emblematic species on the verge of extinction. At a time when we are currently witnessing the sixth mass extinction, giving the green light to a project that would accelerate the degradation of biodiversity in Quebec would be irresponsible,” says Alice-Anne Simard of Nature Québec.

Not only are the signatories of the petition calling on the Legault government to reject the project, they are also asking that the project not be financed in any way with public funds, which echoes the survey released on December 2nd showing that the majority of Quebecers are opposed to government financial participation in this project. “GNL Québec is in serious financial difficulty and the company knows full well that without public money, its project to export its expensive gas to a saturated world market will never be viable. The government would be ill-advised to spend taxpayers’ money on this bottomless well: it must listen to the population and propose future economic development projects,” concludes Marc-André Viau of Équiterre.

On behalf of NGOs: