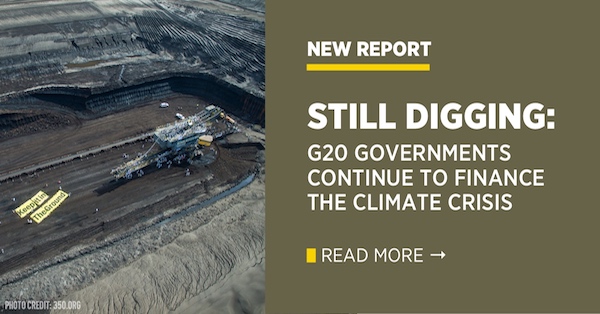 EDMONTON, AB – A new report released today by Oil Change International and Friends of the Earth U.S. shows that Canada has been providing at least CAD 13.8 billion a year in public finance to oil and gas projects since the Paris Climate Agreement, all through federal crown corporation Export Development Canada (EDC). This means Canada has the highest per capita levels of public finance for fossil fuels in the G20, and the second-highest overall after China. G20 countries together financed at least CAD 102 billion (USD 77 Billion) a year to fossil fuels 2016 to 2018 – more than three times what they are providing to clean energy.

As Canada prepares historic levels of public finance in response to COVID-19, much of which will flow through EDC, the new report demonstrates that its public finance has to date been dramatically misaligned with what is needed to avoid the worst of climate change. The report urges the federal government and EDC to stop using public money to prop up risky oil and gas projects like Trans Mountain pipeline and Coastal GasLink pipeline, and instead invest in a just and sustainable recovery.

Utilizing data from Oil Change International’s Shift the Subsidies database for 2013-2018, the report analyzes public finance for energy coming from G20 export credit agencies (ECAs), development finance institutions (DFIs), as well as the major multilateral development banks (MDBs). It does not include direct subsidies for the industry through tax and fiscal subsidies which are an estimated additional $80 billion a year. Some of the key findings include:

Bronwen Tucker, report author and research analyst at Oil Change International: “As the health and livelihoods of millions are at risk from the still unfolding COVID-19 crisis, it’s critical the federal government gets recovery spending right. Right now, much of our stimulus money is flowing through Export Development Canada, and that’s alarming when it has such a deep bias towards oil and gas. An institution that’s backed risky projects like the Coastal GasLink pipeline and the Trans Mountain Expansion pipeline despite Indigenous rights violations and the climate crisis is not fit to finance a just recovery — at least not without serious reform.”

Kate DeAngelis, report author and senior international policy analyst at Friends of the Earth U.S.: “Canada is continuing to subsidize the oil and gas industry even as it makes bad business decisions that hurt people and the planet. Our planet is hurtling towards climate catastrophe and these countries are pouring gasoline on the fire to the tune of billions. We must hold Canada and other G20 governments accountable for their promises to move toward clean energy. Canada has an opportunity to reflect and change its financing so that it supports clean energy solutions that will not exacerbate bad health outcomes and put workers at greater risk.”

Julia Levin, Climate and Energy Program Manager, Environmental Defence Canada: “Canada cannot claim to be a climate leader while it allows a crown corporation to hand out over ten billion a year to oil and gas projects, while largely ignoring the clean energy sector. Paired with Export Development Canada's notorious lack of transparency and the recent legislative changes that increased its financing limits, we are very concerned that the agency will risk public money - without public scrutiny - on loans to oil and gas companies that were facing insolvency long before COVID-19 appeared.”

Karen Hamilton, Program Officer, Above Ground: “For years we’ve been calling on Ottawa to end Export Development Canada’s support for fossil fuels, and our calls have been met with silence. With Canada’s per-capita public financing of fossil fuels now the highest in the world, will the government finally acknowledge the need to align its public finance policies with its climate commitments?”

Catherine Abreu, Executive Director, Climate Action Network Canada: “Canada must support a just transition from fossil fuels that protects workers, communities, and the climate — both at home and beyond Canada’s borders. Instead of using the current major health crisis as an excuse to bankroll another major health crisis — climate change — our governments must invest in a just recovery from COVID-19 that builds our collective resilience to future shocks.”

Oil Change International is a research, communication, and advocacy organization focused on exposing the true costs of fossil fuels and facilitating the coming transition towards clean energy.

Friends of the Earth fights to protect our environment and create a healthy and just world. We speak truth to power and expose those who endanger people and the planet. Our campaigns work to hold politicians and corporations accountable, transform our economic systems, protect our forests and oceans, and revolutionize our food & agriculture systems.