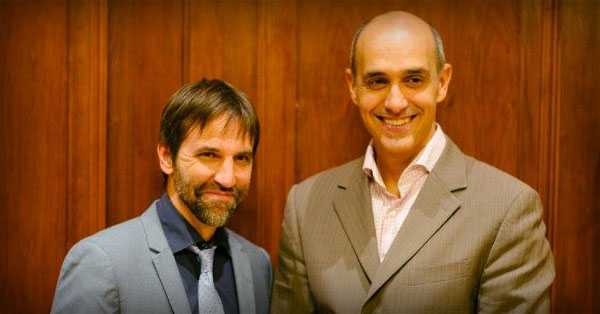 Montreal, October 12, 2018 – It is with feelings of nostalgia that Sidney Ribaux, Cofounder and Executive Director of Équiterre, announced the departure of Steven Guilbeault from Québec’s most influential environmental organization. Twenty-five years ago, the two men founded Équiterre with four other friends and environmentalist activists.

“Steven is an incredible force in the Canadian environmental movement and it has been an immense pleasure to work with him all these years,” stated Sidney Ribaux. “I will miss our regular exchanges of ideas, but am consoled by knowing that he will remain a part of the movement to accelerate the transition to a more sustainable world, a transition which must include all sectors of society – citizens, businesses, municipalities, governments and investors. Each must play an important role.”

“Over the past 25 years, I have never been very far from Équiterre, and this decision was one of the hardest that I’ve ever had to make,” stated Steven Guilbeault. “It has been a great privilege for me over the past ten years to work with our staff team, volunteers and devoted activists, among whom I have made many friends,” he added.

Devotion to the environment and the fight against climate change continues

After founding Équiterre with Sidney Ribaux and four other colleagues, Steven Guilbeault worked with the organization for a few years before joining Greenpeace for ten years. In 2007, he came back to Équiterre as Senior Director and spokesperson for the organization.

His work in the fight against climate change will continue in the technological investment sector, in clean energy technology and artificial intelligence. He will divide his time between writing his new book on the role of artificial intelligence in the fight against climate change and his work as a strategic consultant for Cycle Capital Management – a Canadian cleantech venture capital fund manager – and for Copticom, a communications and public relations firm specialized in green economy and social economy issues.

“I’ve always been interested in the role that new technologies play in the fight against climate change and I intend to further my research on the impact of artificial intelligence in this domain. A year ago, António Guterres, Secretary General of the United Nations and Jim Yong Kim, President of the World Bank Group, stated the need to accelerate funding for climate action. I believe that the investment sector can and should play a principal role in the face of the climate crisis, which is why I’ve decided to provide my expertise and my energy to the sector,” explained Steven Guilbeault.

The Executive Director of the environmental organization announced a reorganization of upper management responsibilities. Annie Bérubé, Director of Government Relations, who is already well versed in media relations, will be called upon more frequently in this capacity for all federal public policy dossiers. Colleen Thorpe, Director of Educational Programs, will from now on be spokesperson for dossiers concerning sustainable food procurement, obsolescence and responsible consumption. Sidney Ribaux, who remains Executive Director, will take on all other official spokesperson duties as well as the government representation duties that Mr. Guilbeault was responsible for.

Équiterre, has over 22,000 members who provide more than 50% of the organization’s financing, and more than 140,000 supporters who encourage its work. The organization, which is celebrating its 25th anniversary this year, has offices in Montreal, Quebec City and Ottawa and influences public policy at the federal and provincial levels. Its head office is located in Montreal’s Centre for Sustainable Development, an exemplary green building, that Équiterre helped create.