The True Cost of Oil Exhibit by photographer Garth Lenz. An unprecedented look on the oil sands disaster

Montreal, February 25, 2016 - From February 27 to March 18, the Centre for Sustainable Development (CSD) and Équiterre are presenting The True Cost of Oil exhibit by international artist Garth Lenz.

This unique exhibit is a comparative study of the Alberta Oil Sands, the biggest polluting energy project in the world, and the boreal forest, the largest and most intact forest remaining on Earth. The exhibit also explores in a highly evocative way broad issues related to climate change, fossil fuels, extreme oil, pollution, and environmental and social impacts on First Nations.

“Compared to conventional oil production, extraction from oil sands emits three to four times more greenhouse gases making this oil one of the dirtiest fuels in the world. The Energy East pipeline would, by itself, enable the creation of new oil sands mines which would increase Canada’s GHG emissions by 32 megatonnes, the equivalent of adding 7 million cars on our roads.” says Steven Guilbeault, Senior Director at Équiterre. “This is an aberration if you consider that scientists from around the world are urging us to take action against climate change and that ambitious international agreements have recently been signed to that end in Paris. “Destroying the boreal forest - the world’s greatest terrestrial storehouse of carbon - is exactly the opposite of what should be done to restore the climate balance and to ensure a safe future.”

“This exhibit will give viewers an opportunity to see the Tar Sands in a way few people have. The beauty of the industrial images reflect our conflicted relationship with fossil fuels; we lament their impacts while continuing to use them in our everyday life. The contrasting images of the surrounding boreal landscape serve as a reminder of the true cost of our dependence on fossil fuels and why Canada's Tar Sands are perhaps the most visually compelling example of the true impact of that dependence, and why we much change or face dire consequences for all life on Earth. It is my hope that this exhibit will give viewers of all viewpoints an opportunity to consider the true cost of oil.”

Exhibit Opening
The opening of the exhibit takes place on February 27 at 8PM, during the Nuit Blanche at the CSD. At this event, Steven Guilbeault, Senior Director at Équiterre, will present the artist and discuss the importance of this exhibit in the current Canadian context. Participants will also be able to take part in many other activities that are planned for the Nuit Blanche, such as a photo booth, hockey against climate change, dancing and other surprises.
Duration of event: 5 h.

Public talk on March 1
Équiterre seizes the opportunity of the artist’s visit to Montreal to have him speak at a lunchtime public talk (on site or via webcast). The British Columbia artist has already given a TED Talk on the subject. A unique occasion to raise general awareness about the cost of our dependence on fossil fuels. To reserve: www.lamdd.org/RSVP

About the artist
Garth Lenz has received several international awards for both his work in visual and his editorial work. In 2009, he was named Senior Fellow of the International League of Conservation Photographers, one of only 60 photographers in the world to receive this honour. Garth Lenz’s work appears in world-renowned publications such as Time Magazine, GEO, National Geographic Society, The New York Times, Canadian Geographic, The Guardian, Esquire and many others.

Thank you!
The Centre for Sustainable Development wishes to thank Équiterre, Fondaction, the Caisse d'économie sociale et solidaire Desjardins, the partners of the Nuit blanche, the Groupe Photo Média International, Copticom, Novae, the Journal Métro as well as Alcoa, its primary partner for programming. The greenhouse gas emissions related to participants’ transportation compensated thanks to a partnership with Planetair. 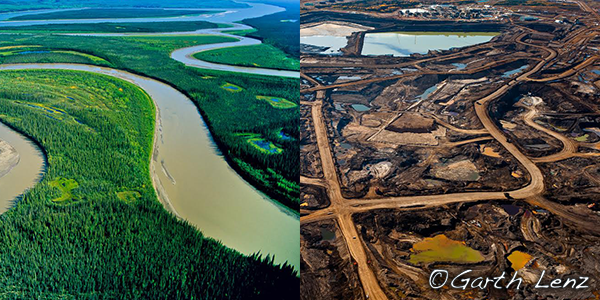