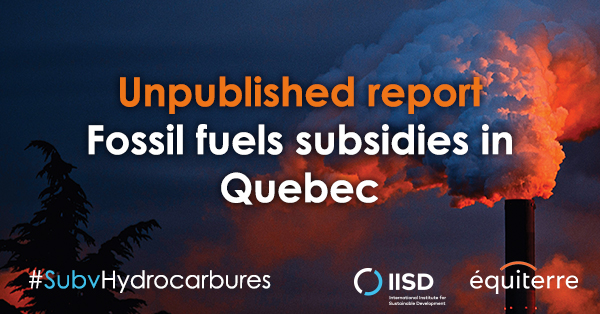 Montréal, Wednesday, March 21, 2018 – On the eve of the provincial budget announcement, Équiterre and the International Institute for Sustainable Development (IISD) today released an unpublished report on how much the Quebec Government has spent in support of hydrocarbons, showing that:

These are actions that go against its own energy-transition commitments and the attainment of its ambitious climate-change goals, and are also in contradiction with the primary goal of the Green Fund. We need to remember that the Québec Government:

“This study shows that it’s not just the Federal Government that needs to make changes in the way it handles subsidies and tax credits in order to maximize both the fight against climate change and reduce our dependence on hydrocarbons. Québec also needs to stop making investments through its crown corporations that encourage the use of hydrocarbons,” stated Steven Guilbeault, Équiterre’s Senior Director.

“Compiling this data was a complex task, given the lack of detailed information on the amounts invested by the Québec Government on hydrocarbon consumption and development. A more transparent and thorough form of accounting would allow for closer monitoring of expenditures made each year by the provincial government and its agents on hydrocarbons, and is something that Quebec taxpayers deserve,” explained Yanick Touchette, Policy Advisor on Energy with the International Institute for Sustainable Development (IISD).

The report shows that the vast majority of subsidies is not intended, as is the case with the Federal Government, for the production of hydrocarbons in Québec, but indeed for consumption subsidies.

“We feel that, just as Canada committed itself to do at the G20 and at the G7, Québec should eliminate all these subsidies by 2025,” added Guilbeault. “That Québec wants to support remote communities, and encourage the agricultural and public transportation sectors is possible and desirable, but should not be done by supporting the use of hydrocarbons. Even though Québec has one of the highest gasoline tax rates in the country, the fight against climate change requires a reduction in the use of all fossil-based forms of energy; transitioning from one form to another is simply not enough. There are other policies that can be used to achieve the same socio-economic goals,” stated Guilbeault.

At a time when markets are divesting themselves from investments in hydrocarbons world-wide, Équiterre calls on the government to: