Two Montreal schools have chosen to innovate this year by launching a new type of fundraising activity for their projects. Thanks to the project Schools Take Root: For Healthy, Local and Sustainable Food, these schools are giving youngsters and their parents a chance to discover the surprising and delicious root vegetables of Quebec. Featuring healthy, organic produce grown and delivered by a local farmer, these baskets offer a welcome alternative to the traditional oranges and chocolate, while creating a virtuous circle where everyone’s a winner!

Coordinated and implemented jointly by Équiterre and the Lester-B.-Pearson School Board and its partners, this project is an initiative of the Système alimentaire montréalais (SAM), whose mandate is to promote local, organic food in schools on the Island of Montreal. This project will help get students and their families interested in consuming healthy, local food, while increasing demand for local products in the long run and promoting healthy eating habits.

As stated by Murielle Vrins, project manager at Equiterre, ''Organic baskets offer an interesting alternative to selling oranges or chocolate bars''. According to the producers, it is a ''win-win'' initiative.

The first delivery of organic vegetable baskets took place on November 16 as part of a fundraising activity organized by the St. Charles School in Pierrefonds. Frédéric Thériault of the Ferme Coopérative Tourne-Sol, an organic farmer and member of Équiterre’s network of family farmers, made a delivery of 50 baskets sold by the school to youngsters and their families, who became the first participants in this pilot project. The school raised 300$ to give to Verdun Elementary to put in place a Christmas basket campaign. More than 400 kilograms of organic vegetables were sold!

A second delivery was made on November 22 at Le Vitrail, a school in Rosemont-La-Petite-Patrie. François Tanguay, from the farm Les jardins du Petit Tremble and also a member of Équiterre’s network of family farmers, delivered 135 baskets of tasty local and organic vegetables to the school. Le Vitrail opened its doors in 2015 and the money will be used to restore the school playground, which hasn't been used for 8 years. More than 1 350 kilograms of vegetables were sold!

Four Montreal schools will join the initiative next year. '' We want to put in place a ready-to-use project for schools. We would like it to be accessible for all. '' expresses Murielle Vrins from Équiterre.

Families interested in continuing to receive organic vegetable baskets on a regular basis from the farmers serving their local community can sign up here for the winter or summer season. 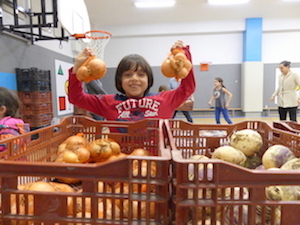 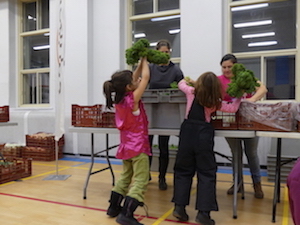 WHY THIS TYPE OF CAMPAIGN?

While this project is the first of its kind in Quebec, it is inspired by similar initiatives that have emerged in other provinces. This innovative idea first took root in Manitoba, where a fundraising campaign offering root vegetables is organized each fall under the management and coordination of an association of local farmers known as Peak of the Market. In 2015, over 350,000 kg of Manitoba-grown vegetables were sold and delivered to 358 schools and day care centres across the province. Manitoba is the first province in Canada to have established such a program province-wide, but similar projects have already been launched in Ontario and British Columbia, with others soon to follow in Nova Scotia and Newfoundland.

The project Schools Take Root: For Healthy, Local and Sustainable Food is an initiative of the Système alimentaire montréalais (SAM), coordinated and implemented by Équiterre and the Lester-B.-Pearson School Board, in partnership with the Direction régionale de santé publique du Centre intégré universitaire de santé et de services sociaux du Centre-Sud-de-l'Île-de-Montréal. The project was made possible thanks to the support of the Quebec Department of Agriculture, Fisheries and Food, as part of the program Proximité, funded under the Entente Canada-Québec Cultivons l’avenir 2. The project also received assistance from Québec en forme.