According to a new national survey, a strong majority of Canadians from across the country support government actions for clean energy

A strong majority of Canadians support specific government actions to cut global warming pollution by boosting energy-efficient vehicles and products, and developing more clean energy, according to a new national survey conducted by researchers at the University of Montreal.

The representative poll of 1,200 Canadians conducted in October shows 73% want their governments to do more to limit further climate change from happening.

The poll also found that a majority of Canadians (72%) support a price on carbon, though support declines somewhat when associated with a cost of 2 cents (60%) and 11 cents (46%) per litre at the gas pump. These are the approximate additional costs per litre associated with carbon being priced at $10/tonne and $50/tonne, as proposed by the federal government for 2018 and 2022, respectively.

“After years of appearing to put all our eggs in the same energy basket, this survey reveals Canadians are open to a shift in how we produce energy” said principal investigator Erick Lachapelle, Associate Professor of Political Science at the Unversity of Montreal.. “Canadians are aware of the many benefits of moving toward clean energy. However, we still need governments to lead this effort, as many Canadians are still reluctant to pay more to help spur this transition.” 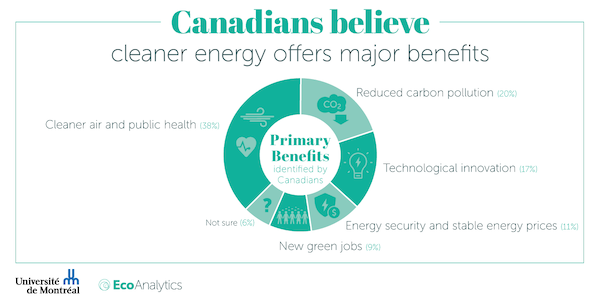 The survey found greater support for a range of other policies to reduce greenhouse gas emissions in Canada. The vast majority of Canadians are in favour of new policies to support renewable energy (87% support), electric vehicles (81%) and energy efficiency (over 90% support).

“Additional regulations on fuel economy and energy efficiency standards in buildings are likely required if Canada wants to meet its international commitments, and would garner support with Canadians regardless of their political tendencies. From Green Party supporters and New Democrats to Liberals and Conservatives, there is cross-partisan support for specific energy efficiency regulations,” said Erick Lachapelle. 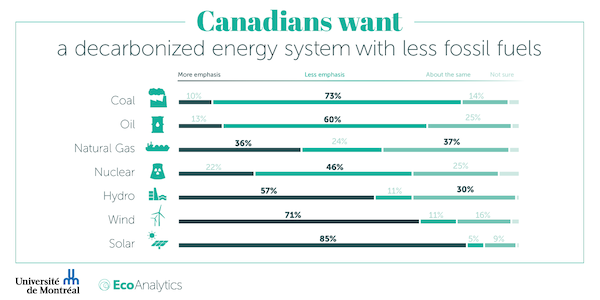 ABOUT THE SURVEY AND ECOANALYTICS

The survey was conducted on behalf of EcoAnalytics, a new, cooperative research initiative led by university researchers and environmental charities and non-profit organizations. EcoAnalytics aims to broaden access to rich sources of data in support of better informed public policies and discourse on important environmental issues. A second major survey, to be conducted early in the new year, will examine Canadian attitudes on environmental issues such as air and water quality, marine, land and species conservation, greenbelts, environmental regulation, toxics and other issues.

The Climate of Change survey used random digit dialling (RDD) of landline and mobile phones to reach a stratified representative sample of 1,200 Canadians aged 18 years and older, from Oct. 5-Oct. 18. Results are considered accurate to within ±2.83%, 19 times out of

Check out these infographics of select results (PDF).