In Quebec, 8,000 school buses take about 500,000 children to school and home again every day. These children spend on average 180 hours on buses during the school year. By the time they finish high school, they will have spent over 2,000 hours on buses.

Quebec could be a leader in school bus electrification. But only a small number of students ride an electric bus to school and just 64 electric school buses have been bought with a government subsidy. Yet school buses are particularly well suited to electrification. The schedules, frequency of use and short distances travelled mean there is enough time to recharge them between trips.

Discover Alice Morel-Michaud's passionate (and exciting!) account in favour of the electric bus (in French only):

This month, Équiterre would like to give you some facts about school bus transportation and ideas for what you can do to ensure more children can get to school the electric way—for the sake of their health and our planet’s!

You will find in this action of the month:

2- Electric school buses : a clean, local alternative
3- How to request electric buses for your school
4- Diesel : a dangerous villain, especially for our children
5- Measures to electrify school buses

There is an alternative to diesel-powered buses—and it’s made locally! The only 100% electric school buses in North America are made in Quebec by Lion. They have a range of up to 150 km now and will soon be even more efficient. 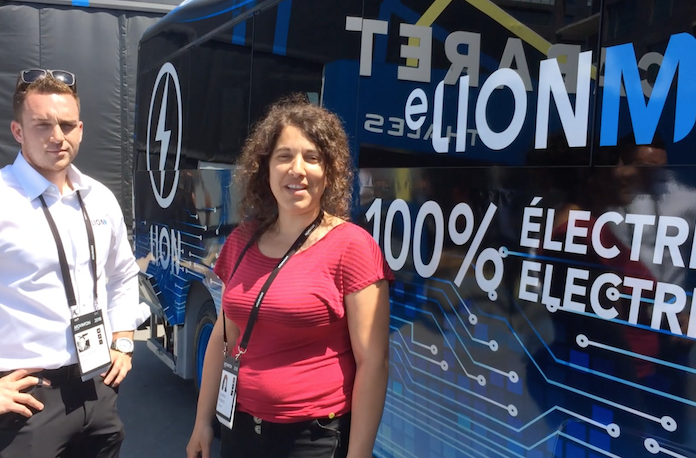 Quebec has what it takes to be a leader in school bus electrification. Some 99.5% of electricity in Quebec comes from a renewable energy source—hydropower, which is cheap and produces very low GHG emissions. Electrification would also help reduce our dependency on oil, a major import. The transportation sector accounts for more than 40 % of GHG emissions in Quebec.

According to the Government of Quebec, electrifying 90% of the school bus fleet would reduce GHG emissions by 2.37 million t. That’s like taking 32,000 cars off the road! As well as environmental and health benefits, school buses have many other pluses:

3-How to request electric buses for your school

Talk to your school’s executive committee about the situation and the need for more electric school buses. There’ll be one more meeting before the end of the school year. You could also talk to the teachers, school principal and school board members. Too few schoolchildren are taking electric transportation to school, even though we have all we need to make it happen.

To send a letter to the school board in your area, consult the document at the end of this article (Attachment : "letter_schoolboard_model.doc").

All school buses should be 100% electric by 2025. Tax and regulatory measures need to be put in place to ensure this becomes reality. 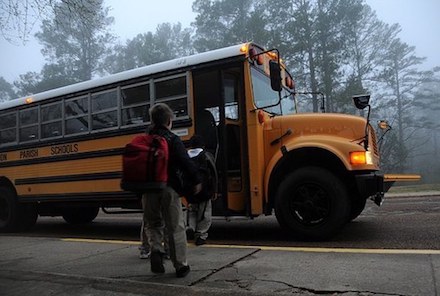 4-Diesel: A dangerous villain, especially for our children

Most school buses in Quebec run on diesel, which, often seen as cleaner than regular gas, but actually has a significant impact on the environment and our health.

Did you know that diesel school buses produce on average 0.89 kg of CO2 per kilometre? That adds up to 23 t per year! What’s more, diesel exhaust contains a cocktail of harmful substances, including toxic gases and very fine particles, which affect air quality and contribute to smog. The fumes seep into the bus, exposing passengers to three times more pollution than if they’d walked the same distance.

Alarming fact: There is no safe level of exposure to diesel exhaust for children, especially those with respiratory illness.

Other health effects of diesel :

Transportation electrification is central to public policy, which is to move towards a prosperous low-carbon economy. Various actions are under way to develop electric transportation systems for individuals, businesses and public services, including school transport. To this end, the government has established an electric school bus subsidy program. Despite this, there are still very few electric buses on the roads in Quebec.

The reason is simple. Electric buses are more expensive to buy than diesel-powered ones, even with the government subsidy. The price difference is too great for electric buses to have a real economic advantage. But after six years, savings on fuel and maintenance could pay for the difference, if buying diesel fuel weren’t subsidized.

Subsidies available for electric bus purchases between 2015 and 2020 amount to $30 million. So far, just $8 million have been granted for the purchase of 64 buses. That’s not enough to meet the government’s greenhouse gas reduction targets. To make matters worse, the electric school bus subsidy has just been cut, so school bus operators have to fork out more. No other measure has been put in place to encourage school bus electrification.

Canada. (December 2005). Evaluation of the Levels of Diesel-related Pollutants on School Buses During the Transportation of Children. Her Majesty the Queen in Right of Canada, represented by the Minister of Health Canada, HC Pub 4010.

Transports Québec. (2015). Program to Support the Use of Electric School Buses in Québec Government of Quebec. Passenger transportation branch.