Equiterre Acts for Canadians’ and Canadian Charities’ Freedom of Speech

Future innovations and achievements are now threatened by the outdated laws of the charitable sector!

A few years ago, the previous federal government, through the Canada Revenue Agency (CRA), submitted numerous charities - including Équiterre - to expensive audits that resembled harassment. These organizations were silenced otherwise their charitable status would be revoked. The main Canadian environmental groups targeting pipeline projects in their fight against climate change were under audit : Équiterre, the David Suzuki Foundation, Environmental Defense, the Ecology Action Center, the Pembina Institute and others.

The Canada Revenue Agency (CRA) is currently conducting a consultation across Canada to change the policy guidelines for charities such as Équiterre. However, it takes more than a cosmetic reform of the guidelines, Canadian law needs to be changed and modernized. If the laws are not changed, this situation could persist and the voices of Canadians would once again be silenced. 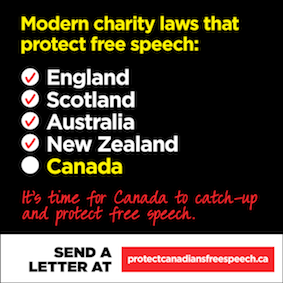 Several countries, such as England, Scotland, Australia and New Zealand, have modernized their laws governing charities. This is not the case in Canada, which still severely limits the freedom of expression of these groups. The CRA even relies on a 1981’s decision of the House of Lords of England that set out the four recognized charitable missions in Canada. How can the 2016 rules be inspired by this era, when we have experienced so much progress relatively to rights and freedoms since then?

Equiterre acted and published a plea, YOU can also act!

Équiterre spoke about this need for modernization during its participation at the CRA consultation in Montreal on December 8th. All of its arguments are found in a plea recently filed with the advisory committee of the Minister of National Revenue, the Minister of Finance and the Prime Minister (Consult here the summary of Équiterre’s arguments and recommendations).

As a citizen, by December 14, you can also ask the federal government to reform the law governing the activities of charities that speak on your behalf and advance the current major social issues. Important measures such as the introduction of drunk driving laws, acid rain reduction and many others have been the result of concerns expressed by Canadian charities.

Act fast, help us protect freedom of speech and make your voice heard!