As Quebec’s most influential environmental organization, Équiterre has participated in the United Nations Climate Change Conferences (UNFCCC), the formal meeting of its Parties (Conference of Parties – COP), since they began in 1995.

This year’s edition, the 24th Conference of Parties (COP24) is taking place in Katowice, Poland from December 2 to 14. Among the 25,000 participants, our Director of Government Relations, Annie Bérubé and our Executive Director, Sidney Ribaux, are in attendance to help move our governments toward ambitious, collaborative, game-changing action to ensure that we keep our planet below 1.5°C of warming.

Why is this COP so important?

Three years after the COP that paved the way to the Paris Agreement, for which governments agreed to pursue a warming limit of 1.5°C above pre-industrial levels, the latest Intergovernmental Panel on Climate Change (IPCC) report has confirmed that current commitments from UNFCCC Parties to reduce greenhouse gas emissions are no way near ambitious enough to reach that goal. COP24 is a critical political moment for Parties to the UNFCCC to show their collective commitment to climate action and affirm their intention to hold global warming to 1.5°C. 2018 is also a critical year for the Paris Agreement, as all the rules and regulations must be finalized by the Parties for its implementation in 2020.

Why do we need to limit planetary warming to 1.5°C?

Our planet is now 1°C warmer than it was before the Industrial Revolution, when greenhouse gas emissions began to increase significantly. The IPCC report explains that though another 0.5°C will increase widespread impacts and losses, limiting warming to 1.5°C instead of 2°C would make a huge difference to reduce further risks regarding weather extremes, species loss, water scarcity, food shortages, heat-related deaths, sea level rise, and so on. The following table by Greenpeace International summarizes the difference. 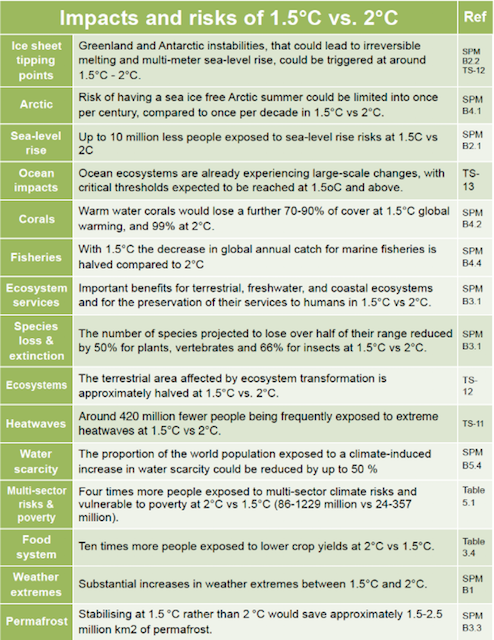 What are our expectations of the Government of Quebec?

Quebec has taken a leadership role at past COPs, and is considered a model of subnational actors engaging in UNFCCC. We want Quebec to:

What are our expectations of the Government of Canada?

The Canadian Government must show leadership at home and on the international scene. Not only is Canada’s current target of reducing emissions 30% below 2005 levels by 2030 insufficient for the 1.5°C goal, but we are not on track to reaching that target.

What role does Équiterre play at the COP?

We have several objectives:

What will determine if this COP is a success or not?