Équiterre would like to pay tribute to all those who work behind the scenes and thank them for their involvement by posting their profiles. Volunteers, interns, friends and partners : their commitment is invaluable and so much appreciated!

“I’m part of the next generation of workers, and I will not let my kids grow up in a polluted world. I want to change the world—now! Then I’ll have no regrets.”

Léa Bédard-Beaulieu is in her second year of a degree in Communications, politics and society at UQAM. This autumn, she brought her energy and enthusiasm to Équiterre’s communications team, working as a part-time volunteer intern.

Léa’s interest in the environment was sparked when she started high school. As part of an open project, she took the initiative to get the school sinks changed, and became more aware of environmental issues while reading about water wastage. But it was a final year high school project, when she travelled to Costa Rica to make a documentary about fair trade and sustainable development, that cemented her commitment. She met local coffee and sugar cane producers through the Coopéagri cooperative, and by the end of the experience, Léa knew she somehow wanted to pursue a career in environment.

While researching fair trade for the documentary, Léa discovered Équiterre and its educational project on fair trade, Pareil pas Pareil [Same, but different]. She then started donating to become an Équiterre member and kept posted on its efforts. When she learned that Équiterre was looking for a communications intern, she jumped at the chance. 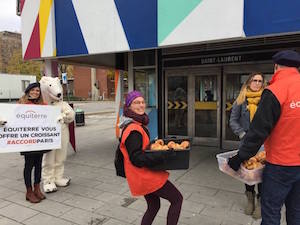 During her internship, Léa became familiar with media relations by working on press lists and conducting media follow-ups. She helped to promote awareness by enhancing the website and gathering statistics. She also carried out research for two action of the month posts and uploaded the texts onto the website. The first encouraged people to repair instead of replacing, and the second suggested ways to focus on solidarity this holiday season. Surrounded by experienced communicators, Léa immersed herself in the dynamics of a professional workplace at team meetings. Her video-editing talents were put to good use too, creating short videos.

Léa will remember the day the Paris Agreement came into force for a long time : she gave croissants to passers-by and took selfies with polar bears in front of the Centre for Sustainable Development (CSD). Léa attended the Great Green Ball to celebrate the fifth anniversary of this exemplary green building, which is home to Équiterre’s offices. She loves the CSD’s green wall : “It makes for beautiful photos!” She also loves working in the heart of the city, at a hub for activities, conferences and workshops. During her first professional experience she learned just how much time we spend in front of a computer. “At least at Équiterre, you can work standing up or sitting on an exercise ball!”

When we asked her what advice she’d give young people interested in the environment, she said she’d tell them to have no fear, and go for it. That it was important to dispel the myth that it’s a field for dreamers and has no future. And that not all environment jobs are in non-profit organizations; businesses are going green, so find your place and go for it!

Léa’s wish for Équiterre before leaving : “That the team keeps going and doesn’t give up, that everyone stays motivated and Équiterre continues to expand.” But more than anything, she wishes for a healthy planet! We wish her all the success in the world! 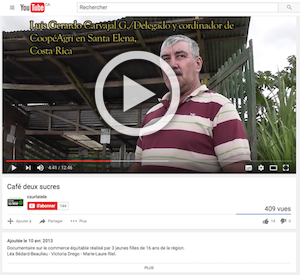