Local food in our public institutions: A great step forward

The Quebec government has just launched its new Stratégie nationale d’achat d’aliments québécois dans les institutions (Strategy for the Purchase of Quebec Food in Institutions) with the goal that 100% of public institutions will have a local food procurement plan by 2025. This important step forward, for which Équiterre has been working for nearly 20 years, positions Quebec as a leader in the field in Canada.

Encouraging the province's public institutions to purchase healthy, local and environmentally-responsible food not only helps to strengthen sustainable agriculture, benefit local communities and increase our food sovereignty, it also makes us more resilient in order to respond to the climate crisis and the COVID crisis.

We all use public institutions at one point or another, whether daycares, schools, hospitals or workplaces. Our public institutions therefore have a major role to play to ensure the sustainability of our food system and to improve its impact on our health and our environment.

Institutions have significant influence as role models to encourage people to make the choice to buy local food for their homes as well. Those who source their food locally are also a great support to local farmers, who can get significant amounts of their produce to market.

What does this new strategy entail?

Basically, it means more local food in our daycares, schools and hospitals, with 85% of Quebec's public education and health institutions adopting local supply targets by 2023 and 100% of them by 2025.

One of the central elements of the strategy is a local supply target, which makes it possible to know precisely what percentage of food being consumed at an institution is from Quebec, and to set objectives to go further. The second key element is the support and the means to get there. 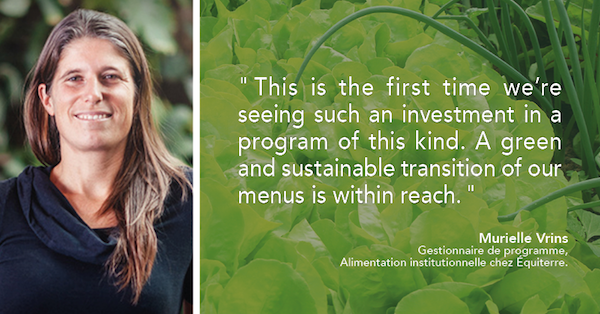 Équiterre's expertise and vision central to the strategy 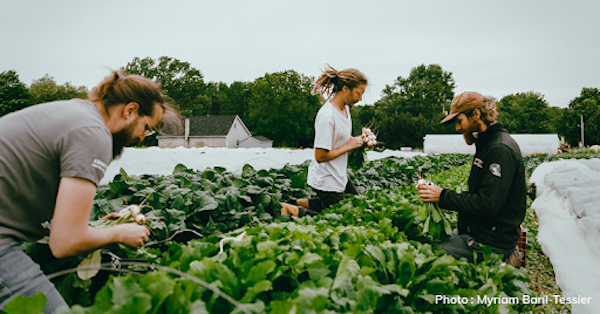 Équiterre has a key role in the execution of the new provincial strategy, consolidating the organization’s unifying role and expertise in the agri-food sector.

Équiterre has been working to encourage local food procurement in Quebec’s public institutions for over 18 years. We’ve carried out numerous projects with daycares, schools, CEGEPs, universities, hospitals and workplaces to help them increase their procurement of local and organic food, while also raising awareness among their clients about healthy, local and environmentally-responsible eating. We’ve also offered consulting services to businesses, contributed to research projects and organized thought leadership events.

Équiterre has recently set up a community of practice around institutional food, in order to mobilize and encourage Quebec institutions to offer more healthy, local and environmentally-responsible food in their food services.

During the second edition of "Les institutions mangent local", in collaboration with Aliments du Québec and the MAPAQ, we unveiled a tool called La recette clé pour un approvisionnement alimentaire local et écoresponsable dans les institutions du Québec (in French), which includes a series of 8 practical fact sheets for daycares, schools, higher education institutions, hospitals and workplaces to help them in their transition to more local and environmentally-responsible food.

Équiterre has developed a network of dynamic partners rooted in their communities with whom we collaborate to identify issues and promising avenues for action and to implement strategies. Working together, we set ambitious objectives and make significant achievements that have decisive impacts.

Going further to ensure the sustainability of our food system 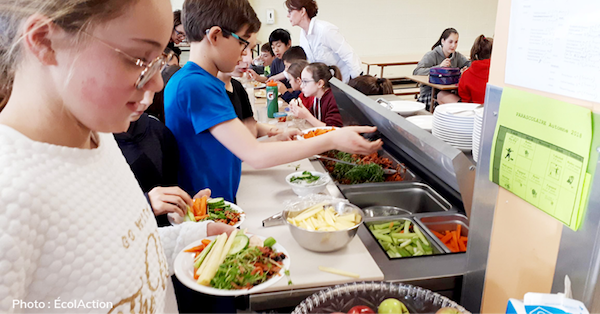 The giant step now is to make local and organic food accessible in all our institutions.

We feel that the context is more favourable than ever to mobilize and advance our demands:

There is still much work to be done, but we know that together we can do it. Copenhagen is an inspiring example. In less than 10 years, the city reached its target: meals offered in public institutions are now 90% organic and are made mainly with local ingredients. And in the end, the prices adjusted too.

The pandemic has shown us that we are capable of acting quickly to find solutions to a major crisis. Together, we have the power to collectively reorient our food and agricultural systems to mitigate and adapt to the impacts of climate change and other crises, in order to secure food supplies for our population.