On Sunday, July 24, La JoualVert Farm opened its doors to other Équiterre family farmers and about 30 people hoping to become one. Owners Andrès Rousseau and Stéphanie Leclerc explained the process of starting an organic farm and their bio-intensive approach. The visitors were also shown the wide range of jobs that can be done with a BCS two-wheeled tractor.

Andrès and Stéphanie are light-hearted. Yes, they have good fun, but they’re also very serious about their work. First, they completed a horticulture program at the Coaticook vocational training centre (CRIFA). They then started their own business, renting a plot of land from the farm business incubator in the same area for two years to gain experience. They even managed to have two children in that time…from growing a business to growing a family! 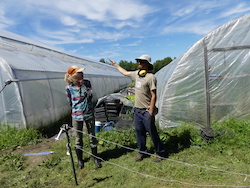 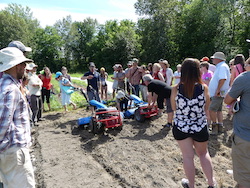 In 2015, Andrès and Stéphanie heard about a plot of land for rent in Cookshire-Eaton, Estrie, at La Généreuse farm, a pioneer in organic farming in Quebec. They decided to move themselves and their business there to increase production. In 2016, they had 135 subscribers to their organic baskets. Today, that number has risen to nearly 180, all in Sherbrooke. All their produce goes to subscribers— people who purchase a share of the harvest in advance, enabling them to plan for the season (www.paniersbio.org/en).

These cheerful farmers experienced disaster in the form of a hailstorm two years ago and were supported by other family farmers, who helped them offset their crop losses. They, too, are big on helping other farmers and are also generous with their knowledge.

Thanks for the visit!