Équiterre took a stand recently to fight against pesticides used in Quebec and Canada that affect our very food supply.

NEONICS ARE CONTRIBUTING TO THE SIXTH MASS EXTINCTION OF WILDLIFE

An updated assessment produced by the largest international group of independent scientists, the Task Force on Systemic Pesticides (TFSP), reveals that neonicotinoid pesticides (neonics) are not only killing pollinators, such as bees, but many more species than was thought. They represent a major worldwide threat to biodiversity and ecosystems.

In response to these alarming findings, Équiterre has relaunched its petition calling on the health minister to ban neonics in Canada immediately.

Canada will release its first-ever food policy in December 2017. A link between what we grow and what we eat has never been made in a policy before. This is the most extensive government collaboration since the development of the Canadian Constitution, with 16 departments and ministries involved.

THE FOOD POLICY MUST HAVE A PESTICIDE REDUCTION STRATEGY

Some 30% of our food supply depends on bees, so if we want to ensure food security for Canadians, we must reduce pesticide use. Pesticides don’t feed us. They threaten the very foundations of farming: pollinators, soil and water.

(Video in French only)

Équiterre wanted to remind our elected officials that Canada must reduce its dependence on pesticide use. So on September 26, Annie Bérubé, Équiterre’s Director of Government Relations, called on elected members of the House of Commons Standing Committee on Agriculture and Agri-Food to include a national policy to reduce pesticide use in the Canadian food policy. 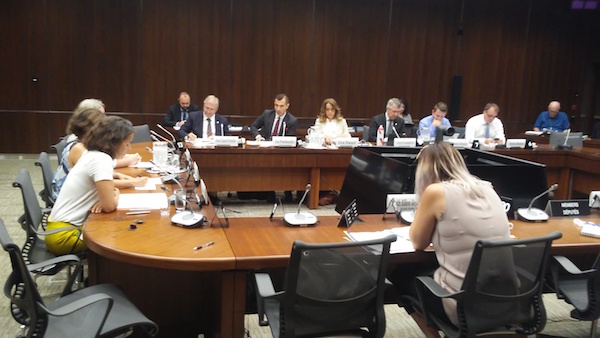 Twitter Annie Bérubé, Director of Governmental Relations, presenting at the House of Commons Standing Committee on Agriculture and Agri-Food.