"On February 8, the Minister of Environment and Climate Change presented Bill C-69, which would centralize environmental assessments within a single agency, the Impact Assessment Agency of Canada (the Agency)."

2. How is it different from the process established under the Harper government?

"In 2012, Harper took the responsibility for impact assessments away from an environmental agency and assigned it to the National Energy Board (NEB) to make it easier to push through pipeline projects and develop oil sands. He also made drastic cuts in all public consultation processes.

The NEB had a specific mandate to regulate the energy sector and did not have, a priori, environmental expertise. Minister McKenna would give this mandate back to an environmental agency together with autonomy, a budget and regulations based on science.

The government wishes to restore public confidence and allow for a more “inclusive” process that is open to companies, citizen groups and indigenous communities."

3. What impacts would be assessed by the Agency?

"Environmental, health, social and economic impacts would be taken into account, which is new—something that didn’t exist even before the Harper era. This process would open the way for broader debate, as is the case with assessments in Quebec where discussions between proponents and citizens run smoothly. That’s why some will say that the Agency is the federal equivalent of the Bureau d’audiences publiques sur l’environnement (Office of public hearings on the environment) or BAPE."

4. What would happen to old organizations like the NEB?

"In the past few years, Équiterre has called for modernization of the NEB (read our brief), highlighting, in particular, its lack of impartiality and credibility. We remember hearings in Montreal where citizens were told that climate change was not considered in pipeline project assessments. What’s more, the process ground to a halt and commissioners resigned after revelations of meetings with Jean Charest, who was acting as a consultant to TransCanada at the time.

The Canadian Energy Regulator would replace the NEB and take over as the regulator, and the responsibility for impact assessments on energy projects would be assigned to the new Agency."

5. What would happen to existing pipeline projects, such as Kinder Morgan’s Trans Mountain pipeline?

"The Minister said they would not take a step backwards. The bill has not yet been passed and would only be introduced in 2019.

Équiterre was disappointed in the Trudeau government two years ago when it announced that Kinder Morgan’s Trans Mountain pipeline project would not be subject to the new assessment process, as promised in the elections. We believe that if the project had been subject to a thorough assessment, including a rigorous climate analysis, it would not have been approved. When we know that projects will require investment and infrastructure for the next 20, 30 and even 50 years, it seems insane to invest in fossil fuels rather than renewable energies.

But it’s reassuring that with this new agency, we would have the tools to better assess projects like Trans Mountain, and that people would be able to participate in the debate on forums."

6. Is Équiterre satisfied with the proposed new bill?

"We think it’s a step in the right direction. With major, structuring bills like this one, the devil is in the details. As with the pan-Canadian climate plan, the government must be able to put words into action."

7. Would the federal government have the last word or would the Agency make the decisions?

"The Agency would remain consultative and the government would have the last word. But the Minister would have to give reasons for the decision publicly and in writing, and based on what is proposed, backed by science. In the case of a highly controversial project, this transparency would bring out elements for further discussion. It would open the door to the possibility of an appeal if the government’s reasons were based on erroneous facts.

In Quebec, the government has the final word as well and the BAPE does not have decision-making power. Over the years, this has shown its relevance and gained the confidence of citizens and environmental groups."

8. Does Équiterre intend to take part in the consultative process for the bill?

"Équiterre will definitely submit a brief on the bill."

The government is seeking public comments on two regulatory approaches. You can express your views here. 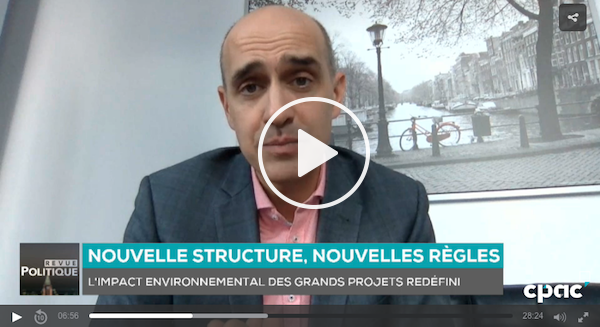 Watch the interview on CPAC