Quebec’s Responsible Investment Board Game: Give Le Responsable a Go!

Learning can be fun. Yes, it’s a well-worn cliché, but so true. Would you believe that learning about responsible investment can be fun? Well, La Caisse d’économie solidaire Desjardins has done a brilliant job in creating Le Responsable and partnering with Équiterre’s Educational Programs to hold game sessions. And the good news is, there are no losers, because the community and the environment always come out on top.

*The game is in French only.

The game in a nutshell 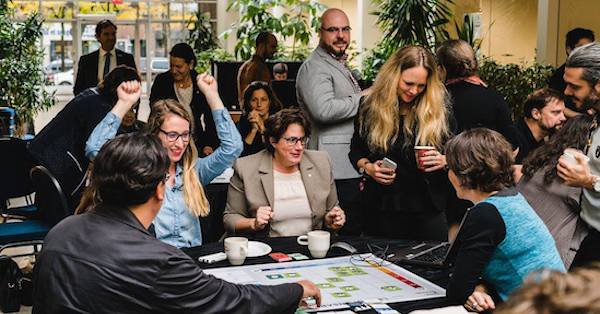 Le Responsable is for the general public. Given that it requires a few teams and a facilitator, distribution agreements have been made with Desjardins Group and Équiterre.

CEGEP and high school students can play Le Responsable as part of the financial education program. Schools can request a game kit by writing to mesfinancesmeschoix@desjardins.com.

Groups and workplaces can book a game session by contacting Équiterre at conference@equiterre or 514-522-2000, ext. 250. Please note that at least 20 people are required to play and there is a fee for each session (two facilitators). The proceeds will help finance Équiterre’s educational programs.

Gérald Fillion at RDI Économi presents the game (French only).

Why responsible investment? And why a game?

Did you know that responsible investment assets have increased from $200 billion to $450 billion in the past decade?

The goal of the initiative is to make more people, especially young people—the next generation of investors—question their bank or financial advisor about the extra-financial aspects of their investments, which means their social and environmental impact. It’s to let people know that these interests are not in conflict with financial performance, that it’s possible to invest differently so that financing is sustainable. “The game is a tool for building a fairer, greener more united society,” says Marc Picard, General Director of the Caisse. 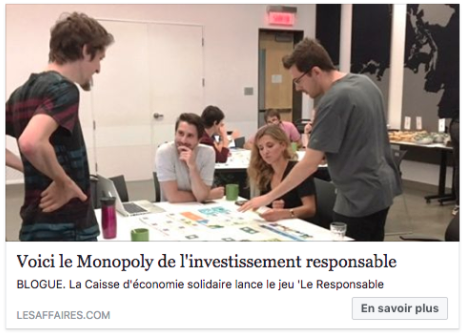 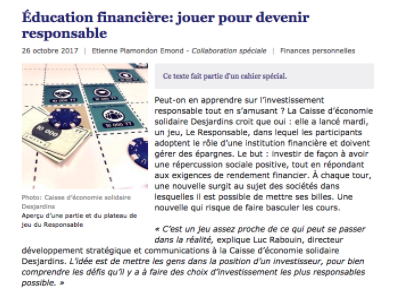 About the Caisse d’économie solidaire Desjardins :

The Caisse d’économie solidaire is Quebec’s leading financial institution specializing in social economy and responsible investment. The Caisse is made up of 15,000 members including 3,000 businesses and associations. As of December 31, 2016, $518 million of members’ responsible savings have been invested in social economy enterprises. The Caisse d’économie solidaire is a proud member of the Global Alliance for Banking on Values.