The power of the collective mobilization against glyphosate

A few weeks ago, Health Canada sparked controversy when it announced that it would be increasing the level of glyphosate allowed in our food. Faced with the outcry over this announcement, the government changed its mind and suspended its decision, while it carries out additional research.

This mobilization against glyphosate is an excellent example of citizen mobilization. There is no social acceptability in 2021 for the unreasonable use of a pesticide that has been found to be a probable carcinogen.

When the announcement occured, Équiterre helped to amplify the voices of Canadians by submitting our petition against glyphosate to four key ministers on behalf of the 33,000 signatories.

Équiterre also welcomed the decisions by Montreal and Laval to ban the use of glyphosate and other pesticides in their cities. We encourage other municipalities to follow suit. 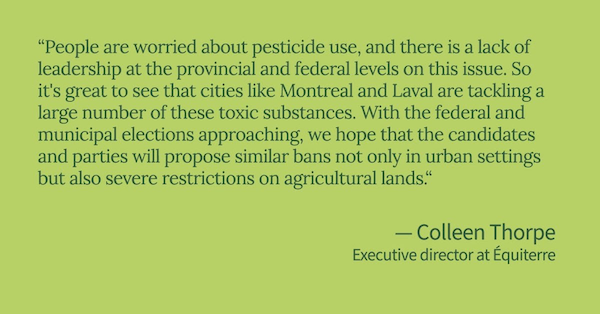 Accelerating the transition to solutions

For many years, the fight against glyphosate has been a central issue for Équiterre. We are now working on regenerative agriculture, a more global approach, which allows us to go to the source of the problem (that creates the need for synthetic pesticides and fertilizers), while also helping to increase the resilience of our farms.

To continue the fight against glyphosate, Équiterre is working as a member of Vigilance OGM, which has launched an ambitious campaign, Sortir du glyphosate, to counteract the agrochemical lobbies and to put pressure on different levels of government. We encourage you to have a look at the 15 demands and to sign the manifesto (in French): #SortirDuGlyphosate.

The fight against glyphosate must continue and we must accelerate the transition to alternative agricultural practices. It is high time for Canada to catch up with the global trend.