#WEARESTILLIN : The US is still in the game

Imagine, if you will: right in the midst of the NAFTA negotiations, Canada and Mexico decide to bypass the White House and work directly with 15 American states to forge ahead in the fight against climate change.

Well, that’s precisely what officials in several of these states, including Oregon, California and Washington, announced yesterday in Bonn.

And to add insult to injury, they made the announcement at the headquarters of the Canadian delegation to the UN Conference… mere steps away from the American delegation offices.

I don’t know about you, but if that’s not Canada and Mexico thumbing their nose at the Trump administration, I don’t know what is!

But let’s get back to #WeAreStillIn, which is the rallying cry of American states that have decided to flout President Trump’s wishes on climate change. This cry has also been taken up by dozens of American cities, not to mention over a hundred US corporations, including Apple, Google and even US Secretary of State Rex Tillerson’s former employer, Exxon.

I heard the governors of Washington, Oregon and California speak forcefully and passionately about what their states (along with the 12 other US Climate Alliance states) are doing to combat climate change. Their actions include a new building code calling for zero net annual energy consumption in new buildings, programs to put more and more electric vehicles on the road and investment in renewable energy.

In short, the message delivered by all these North American actors is clear: when it comes to combatting climate change, the train has left the station and is gathering steam. No one can stop it, not even Donald Trump. 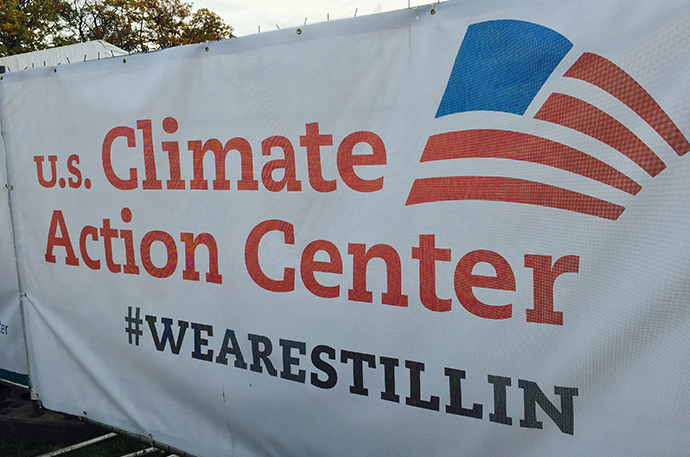