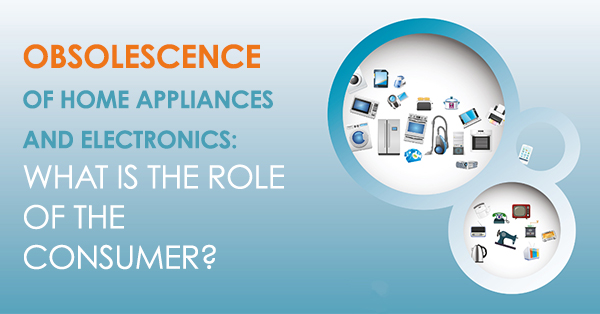 OBSOLESCENCE: A NEW AREA OF FOCUS FOR ÉQUITERRE

Alarmed by the phenomenon of overconsumption, Équiterre made a commitment in its 2017-2020 strategic plan to tackle the issue of obsolescence of consumer goods.

Excessive consumption has significant impacts on the environment, human health and our economy. This report represents the first step in a reflection that will lay the groundwork for a campaign to fight obsolescence. In addition to providing an up-to-the-minute portrait of Canadians' understanding of the phenomenon of obsolescence and of the causes for the premature replacement of HAEs, it recommends concrete solutions for extending their lifespan for citizens, companies and government.

In order to avoid polarizing debates and to emphasize the issue of shared responsibility for the phenomenon, Équiterre has chosen to focus the debate on the simple notion of obsolescence rather than on planned obsolescence.

Équiterre unveiled on May 24, 2018 the findings of the first Canada-wide study on obsolescence and the tendency of Canadian consumers to replace their household appliances and electronics (HAEs) prematurely.

The study was conducted jointly with several partners specializing in responsible consumption, social accountability and the sharing economy, including RECYC-QUÉBEC, France’s Halte à l’obsolescence programmée (HOP), Option consommateurs and the Consumers Council of Canada. The Observatoire de la consommation responsable (OCR) was commissioned to conduct the research on which this study is based.

THE STUDY AND ITS METHODOLOGY

As part of this study, Équiterre:

To read the full report and its appendices.