COP23 Gets Underway in Bonn: Follow Équiterre at this “Ambitious” COP 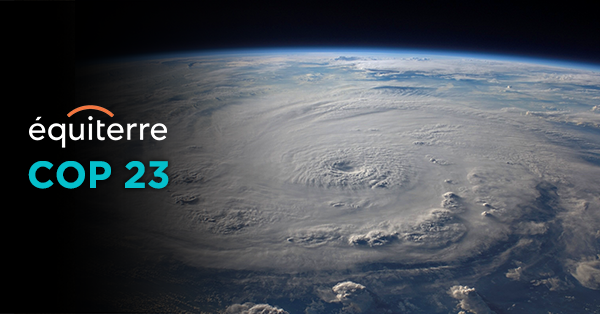 Montreal, November 6, 2017 – With over 20,000 participants from more than 180 countries converging on Bonn today for the kickoff of the 23rd United Nations Climate Change Conference (COP23), Équiterre would like to stress the urgency of action and the important role Canada has to play to combat the impacts of climate change.

“COP23 needs to be the most ambitious ever, given that much remains to be done to avoid the all too real impacts of climate change, which, as we know, stems mainly from human activity,” stated Steven Guilbeault, Senior Director of Équiterre and veteran of over 15 of these international conferences.

COP23 is being led by Fiji, which, like all Pacific Island States, is directly confronted by the new climate realities, particularly the rising sea level which poses an existential threat to this country.

In recent weeks, senior officials, government representatives and international scientific organizations have sounded urgent alarm bells about the fate of the planet and the very real effects of climate change.

Erik Solheimm, Executive Director of the United Nations Environment Program (UNEP), did not mince words: “One year after the Paris Agreement entered into force, we still find ourselves in a situation where we are not doing nearly enough to save hundreds of millions of people from a miserable future.” Highlighting the urgent need for climate action, UN Secretary General Antonio Guterres had this to say: “We are killing our planet.”

When the progress report on the fight against climate change was unveiled on October 3 by the Commissioner of the Environment and Sustainable Development, Elsa Da Costa, a director with the Office of the Auditor General of Canada, spoke about the commitments Canada has made over the past 25 years: “The government has yet to fulfil a single one of its commitments to reduce its emissions. It will miss the target for 2020 and is instead shifting its focus to the new target for 2030.”

Accordingly, it is the opinion of the United Nations that Canada must do more. In Paris, the federal government adopted a target to reduce Canadian emissions by 30% below 2005 levels by the year 2030, the same target set by the Harper government.

Fortunately, solutions already exist to make a significant dent in greenhouse gas emissions in areas such as agriculture, buildings, energy, forestry, industry and transportation. According to the UN report, all that is missing is the political will to achieve the necessary reductions, because the technology is available.

The panCanadian climate plan adopted a year ago is an important step in helping Canada meet its targets, in concert with the provinces. In fact, several of the recommendations made by Équiterre found their way into this plan, including the following:

“Climate change is one of the most important issues of our time, if not the most important, adds Mr. Guilbeault. “The aim of this dialogue initiated by the Conferences of the Parties (COP) is precisely to encourage a more ambitious approach by the Paris Accord signatory states, and it is here in Bonn that this approach must begin.”

Équiterre will be in Bonn from November 11 to 18 to monitor this ambitious COP and to highlight some of these solutions. You can follow coverage of the events at: equiterre.org/cop23