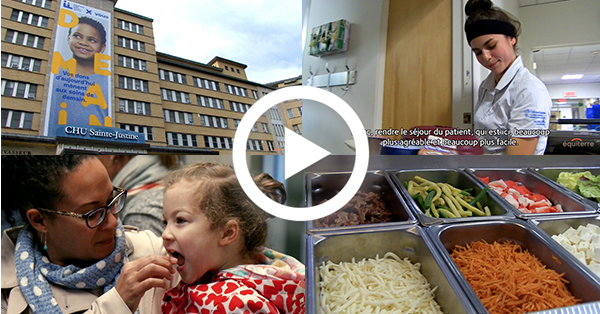 Montreal, October 4, 2018 – In collaboration with Équiterre, the CHU Sainte-Justine's (CHUSJ) food services department has launched a new project to include more local and organic food in the meals that it serves to the children, families, employees and visitors at the hospital.

To celebrate this ground breaking initiative by the hospital, the CHU Sainte-Justine and Équiterre have invited hospital staff members, children and their families, family farmers and special guests to attend a harvest festival at the hospital today. Participants will enjoy cooking demonstrations, sampling of organic vegetables from local farms, a large colouring mural for the children and exchanges on the benefits of locally grown organic produce.

Food: the very basis of life

A number of studies show that children and infants are especially vulnerable to chemical agents such as pesticides, which are widely used by the food industry. Serving organic food helps contribute to better health and a healthier environment.

With Équiterre’s support, the CHUSJ’s food service department, Délipapilles, teamed up with three local organic farms from Équiterre’s family farmer network this past spring. These farmers have been supplying Délipapilles with 17 varieties of organic vegetables since June.

“We’re at a hospital dealing with sick children, so we wanted to offer our clients something better: organic ingredients in their meals,” explains Josée Lavoie, Head of Food Services at Délipapilles.

Benefits for the environment and local economy

Organic farming not only eliminates the harmful effects of synthetic pesticides on our food, but it also allows for a 45% reduction in fossil fuel consumption on the farm as compared with traditional agriculture.

The recent Politique bioalimentaire du Québec calls for increasing Quebecers’ access to healthy, local and environmentally responsible food and the continued growth of the organic sector.

“The CHU Sainte-Justine food services department is a leader in local organic food procurement,” notes Colleen Thorpe, Équiterre’s Director of Educational Programs. “The hospital’s reputation has the potential to influence other public institutions – not just hospitals, but schools and universities as well – to take up the challenge to change their menus. This in turn will encourage the clients of these institutions to make healthy and responsible food choices in their day to day purchases.”

Local and organic food all year round!

Équiterre’s family farmers network is present at the harvest festival to show families that they can eat local organic produce all year long by signing up for organic baskets, regularly delivered to drop-off points throughout the province. The vegetables in these baskets cost 25% less on average than the same items in grocery stores, have far less packaging and are certified organic (no synthetic pesticides). Subscriptions for fall/winter baskets are now available at fermierdefamille.com: over 4 000 baskets are available at nearly 180 delivery points! All those who register before November 15 will be entered in a contest.

In the words of Robin Fortin, a family farmer who supplies CHU Sainte-Justine’s food services, “local organics are the way to go!”

This project has been made possible by the support of the Ministère de l’Agriculture, de l’Alimentation et des Pêcheries du Québec, with funding from the Canada–Quebec Growing Forward 2 Agreement and the Fondation CHU Sainte-Justine.

About Équiterre - www.equiterre.org
Équiterre offers concrete solutions to accelerate the transition towards a society in which individuals, organizations and governments make ecological choices that are both healthy and equitable.