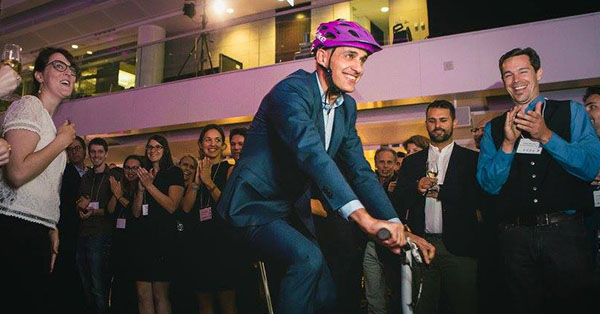 Montreal, April 25, 2019 - It is with much emotion that Hélène Dufresne, the Chair of Équiterre’s board, announced today that Sidney Ribaux, co-founder and Executive Director of Équiterre, Quebec’s largest environmental organization, is leaving his position. Colleen Thorpe, who has been working with Équiterre for over a decade and currently serves as its Director of Educational Programs, will take over as interim Executive Director as of today.

“Sidney is a pillar of the environmental movement in Canada. It has been a tremendous pleasure to work with him over the past several years. The organization he founded with five colleagues 25 years ago will continue to grow. We will continue our work with various levels of government to adopt ambitious public policies and we will continue to encourage individuals and businesses to take the necessary action to effectively combat climate change,” stated Hélène Dufresne.

“For 25 years, Équiterre has been Quebec’s go-to organization on environmental issues. Équiterre has never been as strong as it is today, which is why the time is right for me to take on a new set of challenges, as I continue to work for sustainable development,” explained Sidney Ribaux. “It has been a great privilege for me to work with such a dedicated and professional team at Équiterre, which will now be led by Colleen, a tremendous human being, an experienced professional and a close friend,” he added.

Continued commitment to the environment and sustainable development

Though Sidney Ribaux is leaving Équiterre, he will continue working for the environment and sustainable development with the City of Montreal, filling the newly created post of Director of the Bureau de la transition écologique et de la résilience.

“If the City of Montreal is successful in its ecological transition, it could inspire many other cities, governments and businesses around the world to follow our example. I’m excited to be involved in this ambitious project. Though I’m leaving Équiterre, I’m pursuing my commitment to the environment,” stated Mr. Ribaux.

Équiterre’s team mobilized as never before

“Équiterre is working hard to bring about the urgent changes we need to deal with climate change and to ensure the sustainable development of our communities,” said Colleen Thorpe, Équiterre’s new interim Executive Director. “As Quebec’s new government is defining its environmental action plan, and in the run-up to the federal elections, the entire Équiterre team and its expansive network are engaged and energized to ensure that environmental issues are front and centre in the political and civic life of our democracy,” she added.

About Équiterre:
Équiterre’s 22,000 members provide it with over half of its funding, and its work is encouraged by more than 100,000 supporters. With offices in Montreal, Quebec City and Ottawa, the organization celebrated its 25th anniversary in 2018. It is headquartered in the Centre for Sustainable Development in Montreal, an environmentally friendly building that it helped create. Équiterre influences federal and Quebec public policy on environmental issues and the fight against climate change.
www.equiterre.org/a-propos
www.twitter.com/equiterre
www.facebook.com/equiterre