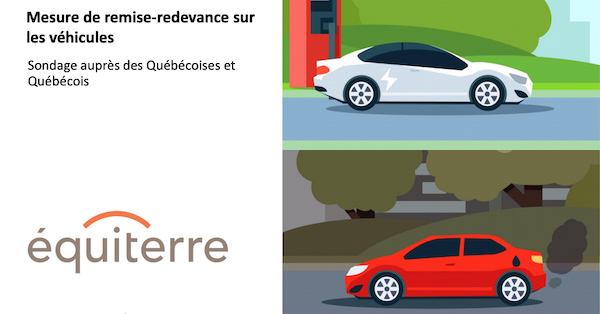 Montreal, February 10, 2020 – The results are in for a Léger Marketing survey commissioned earlier this year by Équiterre, Vivre en ville, the David Suzuki Foundation and the Association des véhicules électriques du Québec on the concept of a rebate-levy to be applied on vehicle sales. Quebecers came out clearly in favour of various ecofiscal measures to help accelerate transportation electrification.

For example, in response to the statement “the Quebec government should incentivize, through various taxation measures, the use of less-polluting vehicles”, 78% of respondents voiced their support, versus 16% who opposed the idea. In response to the question: “Are you in favour of the Quebec government instituting a new tax to discourage polluting vehicles that undermine the fight against climate change?”, 55% of respondents were in favour, while 38% were opposed. For survey results (in French): http://bit.ly/sondageRD

“The results of the survey show that Quebecers are ready to make the necessary efforts to accelerate transportation electrification and curb one of the chief causes of increased greenhouse gas (GHG) emissions from the Quebec transportation sector: polluting vehicles,” states Jessie Pelchat, Équiterre ‘s Public Policy Analyst on transportation.

Quebec prides itself on being a leader in electric mobility. However, despite Quebecers’ enthusiasm for electric vehicles, the road transportation sector is moving backwards with regards to the climate objectives it must meet.

Three troubling observations in the État de l’énergie 2020 report show the need for the government to act at once to reverse this backward trend:

“The gains achieved this past decade in making cars more energy efficient have been wiped out by the growth in the size, weight and number of large cars on our roads. This trend, driven by the automobile industry, is increasing the burden on household debt and making it impossible for us to meet our climate change objectives. The government must act on this,” states Karel Mayrand, Executive Director at the David Suzuki Foundation, Quebec and Atlantic Canada.

An essential measure to make transportation electrification a success

Experts around the world agree: to reach our GHG reduction targets, we must not only reverse the perpetual growth of polluting automobiles on our roads, but we must also speed up the process of electrifying the transportation sector.

To be able to fund transportation electrification, the Quebec government must put in place a an rebate-levy system. The idea is simple: when a vehicle is purchased (or registered), Quebecers should be financially incentivized to choose a zero-emission vehicle (ZEV), and the money for this incentive should come from a transportation electrification levy on owners of gas guzzling, polluting vehicles. The funding would therefore be self-sufficient and have no negative impact on the economy. The amount of money raised by the electrification levy would be proportional to the GHGs emitted by gasoline-powered vehicles.

Such a system would generate enough revenue to fund electric vehicle purchase incentives, as well as other transportation electrification projects. What’s more, it would lead to a reduction in the number of privately-owned vehicles and polluting vehicles on our roads, an essential condition for meeting our GHG reduction targets for the transportation sector.

“Financial incentives to purchase electric vehicles will remain necessary if Quebec is to meet ambitious objectives for transportation electrification and emissions reductions by 2030. It is necessary – and only reasonable – that owners of polluting vehicles do their share by paying an electrification levy. By tying this levy to the subsidy for purchasing a ZEV in a self-funded program, Quebec will be using an ecofiscal measure to fast-track the transition to low-emission vehicles without putting a strain on public finances,” notes Christian Savard, Executive Director of Vivre en ville.

In addition, to ensure a sufficient supply of ZEVs to meet the growing consumer demand for electric vehicles, the government must make the ZEV standard more ambitious. Adopted in 2018, this standard requires automobile makers to offer Quebec consumers a larger number and variety of ZEVs.

The goal of the ZEV standard is to get automobile manufacturers to produce more models. However, the standard’s requirements are not ambitious enough to satisfy the growing demand for these vehicles. In fact, estimated sales under the standard do not take account of Quebecers’ growing enthusiasm for ZEVs. Moreover, the lack of inventory remains a major impediment. We’re asking the Quebec government to review the parameters of the existing standard in order to achieve 100% ZEV sales by 2030.

“We feel it is critical to strengthen the ZEV standard adopted by the government in 2018 if its objectives of 100,000 electric vehicles by the end of this year and 300,000 by 2026 are to be met. This standard should allow dealerships to offer consumers a sufficient supply of vehicles, but manufacturers are offering the bare minimum that is required under today’s weak regulations. In the year 2020, it is unacceptable that waiting lists to purchase a ZEV are still the norm at Quebec car dealerships, and we simply must set things straight,” says Simon-Pierre Rioux, the founding president of the Association des véhicules électriques du Québec (AVÉQ).

“Having ambitious objectives is no longer enough in the midst of a climate crisis. Quebec must take bold measures to halt the worrisome increase in large polluting vehicles on our roads, and it must do so at once,” highlights Catherine Gauthier, Executive Director of ENvironnement JEUnesse. “We can’t wait any longer. Every time we punt a climate measure until later, a part of our future goes up in flames.”

If the Quebec government is to take the climate crisis seriously and if it wishes to meet its GHG reduction targets, it is essential that it introduce these behaviour-changing measures. The success of the future Electrification and Climate Change Plan (ECCP) is in the balance.