“Intensive farming is not sustainable. I’d like to see farmers in the South growing food for themselves rather than producing for others and being exploited.” – Mathilde Gourgues, short food-supply chains intern, winter 2017

Équiterre welcomes volunteers and interns from diverse backgrounds who share a strong commitment to the environment. Mathilde Gourgues, a short food-supply chains intern in winter 2017, is a great example. With her endearing, infectious smile, she has taken an unusual path: from organic dairy farming in France to sustainable development in Colombia and then to Équiterre in Montreal. Let us introduce you to Mathilde Gourgues, a volunteer who is certainly bold and daring! 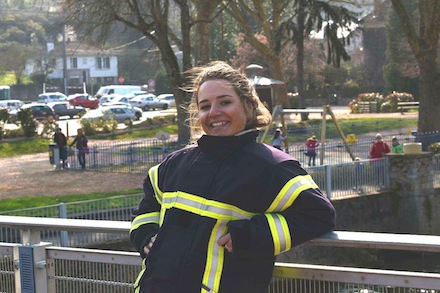 Mathilde as a volunteer firefighter in France

Born in Toulouse, France, in 1995, Mathilde grew up in a rural area. Active from a young age, she put her energy into sports, like track and field, being a junior firefighter and getting involved in the community. Mathilde was a member of the youth general council in her district and the youth municipal council in her town. There was no time to be bored at home with her father running the first organic dairy farm in the district. She lived in a green house that took eight years to build, and the locals called her father “the poet”!

After studying for two years at Sciences Po Toulouse, Mathilde took a year off to go abroad. Before joining Équiterre, she took a course in Bogotà, Colombia. “They may not be as environmentally aware as people here, but in recent peace agreements, FARC expressed a willingness to engage in sustainable development. For example, land that they had cultivated for coca production will be used for organic farming.” And thanks to a special reintegration program for former FARC rebels, some may even do farming internships at Mathilde’s father’s farm in France. We live in an interconnected world! 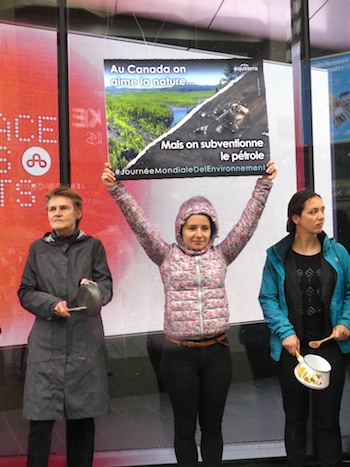 On joining Équiterre, Mathilde was assigned to the institutional food team. She performed various one-off tasks, such as doing research for the Schools Take Root project, making recipe cards for educational activities and writing articles for local marketing newsletters. The main project she was involved in from start to finish was the Great Big Crunch, a pan-Canadian event to raise awareness about healthy food. Some 250,000 school children bit into an apple or other healthy snack at exactly the same time on a special theme day. This was the first time Équiterre was involved, with a farm in the network providing six schools with organic apples for the event: “I was even in contact with a school in Purvinituq, Northern Quebec. The teacher had organized a fishing day and wanted the students to bite into a raw fish!” As well as organizing the event, Mathilde compiled a small quiz on local organic food. The funny thing is, a big snowstorm caught the young French intern by surprise and jeopardized the event. You have to be ready for anything in Quebec!

Mathilde loves the atmosphere at Équiterre. For her, the conditions enable employees to have lives outside work and spend time with people who share similar values. She also says she has really grown as a person over the course of the internship.

On her return to France, Mathilde is going to pursue a master’s in sustainable development and international cooperation in southern countries. She then plans to do a master’s in agronomy, believing that community gardening can be a form of rehabilitation. The internship has inspired her to develop a project idea and made her realize that it could work.

Mathilde hopes that nobody stands in Équiterre’s way and that we achieve our objectives, one step at a time. We wish Mathilde all the best and thank her for everything she’s done! 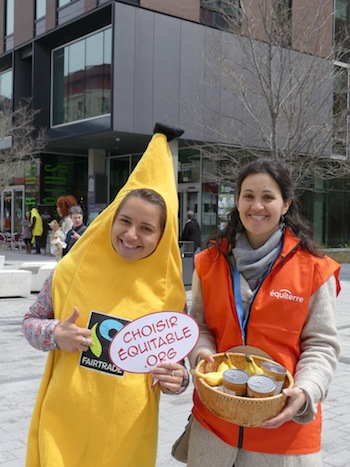