First anniversary of the announcement of the purchase of the Trans Mountain pipeline by the federal government: Équiterre files two petitions against the use of public funds for the oil and gas industry

One year ago today, despite strong opposition from the public, the Government of Canada announced that it would be purchasing the Kinder Morgan Trans Mountain pipeline for $4.5 billion, along with its planned expansion. Since that date, Équiterre and numerous other environmental and citizen advocacy groups have continued to oppose the Trans Mountain expansion (TMX) project.

Today, one year later, Équiterre filed a petition containing over 15,000 signatures against the use of public funds for the purchase of this pipeline and asking that the rights of indigenous communities and the population of British Columbia be respected. On this anniversary, Équiterre is also taking the opportunity to remind the government of its unfulfilled election promise to eliminate fossil fuel subsidies, by filing another petition containing close to 15,000 signatures against fossil fuel subsidies—another use of public funds to support the fossil fuel industry. 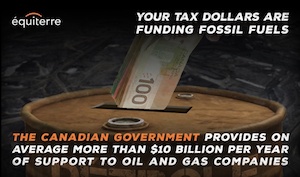 “We must stop using public money to finance the oil and gas industry. That's the message of the tens of thousands of Canadian citizens who signed the petitions that we're presenting to the federal government today,” states Colleen Thorpe, Équiterre’s Interim Executive Director. “The federal government must stop speaking out of both sides of its mouth: on one side, recognizing the climate crisis and on the other, financing one of the most polluting industries on the planet,” adds Ms. Thorpe.

Trans Mountain: An investment in a project that is worsening the climate crisis

The Trans Mountain Expansion project would allow for increased development of the Canadian tar sands that, in terms of greenhouse gas (GHG) emissions, would be the equivalent of adding 3 million vehicles to the roads. The additional carbon pollution would cause serious harm to Canada’s ability to achieve the GHG reduction target that it has committed to under the Paris Agreement. 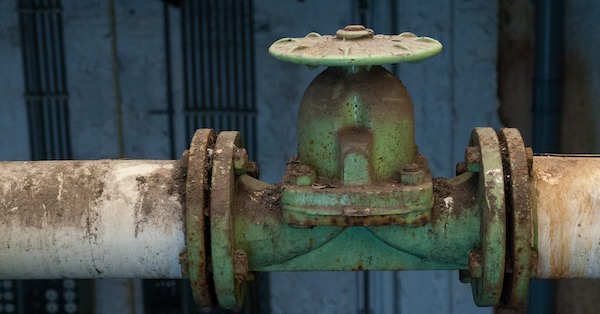 Phasing out subsidies to the fossil fuel industry was one of the priorities that the federal Liberal government set out in 2015, when it took office. The commitment is recorded in the mandate letters to the Minister of the Environment and Climate Change and to the Minister of Finance.

Compared with the other G7 countries, Canada is the largest provider of government assistance to the production of oil and gas per unit of GDP.

In May 2016, the G7 countries committed to ending all “inefficient fossil fuel subsidies” by 2025. This is a long-term commitment made at the G20 meeting in 2009. Despite Canada’s commitment to gradually eliminate fossil fuel subsidies and to combat climate change within the framework of the Paris Agreement, the federal government continues to provide billions of dollars in financial assistance to the oil and gas industry every year.

“The federal government has, for far too long, been dragging its feet on its commitment to eliminate fossil fuel subsidies, a commitment that it reiterated recently at the G7 meeting in Charlevoix. The energy transition can no longer wait,” concludes Ms. Thorpe.