This fall, Équiterre is actively involved in two major rounds of public consultations that will play a key role in helping Quebec’s meet its greenhouse gas (GHG) reduction targets, particularly in the transportation sector. The first is for the government’s future Electrification and Climate Change Plan (ECCP), and the second focuses on funding for the Sustainable Mobility Policy adopted last year.

Équiterre is highlighting the need for Quebec to be guided by the “Reduce-Transfer-Improve” approach, and will be proposing concrete tools.

We are currently observing two significant trends in Quebec. On the one hand, there is a growing excitement among Quebecers for electrical vehicles. Sales of rechargeable electric vehicles have exploded over the past five years, practically doubling last year alone (a jump of 80%). On the other hand, the GHG reductions that we should be seeing through increasing numbers electric vehicles on the road are being completely cancelled out by Quebec consumers’ love for light trucks, such as sport utility vehicles (SUVs) and pickup trucks.

Équiterre will soon be providing the Quebec government with a concrete proposal to attack this major problem head on, while at the same time allowing Quebec to generate revenues to push ahead in its efforts to electrify passenger vehicles.

Here are the broad strokes. 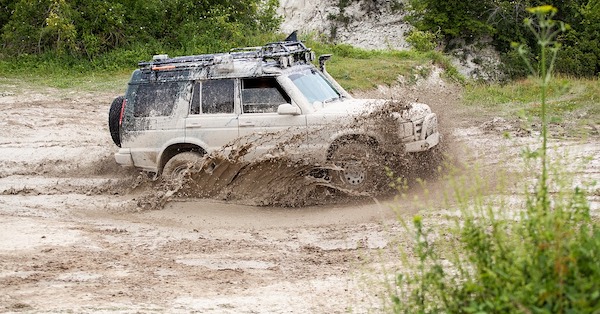 A disturbing trend has recently emerged in Quebec. While fuel efficiency has improved and excitement for electric vehicles continues unabated, Quebec’s vehicles – 36% of which are now light trucks (SUVs, minivans and pickup trucks) – are driving up the transportation sector’s GHG emissions. In 1990, SUVs accounted for only 15% of vehicles. Since then, there have been more light trucks sold in Quebec than cars, a trend that shows no signs of slowing down (Figure 1) 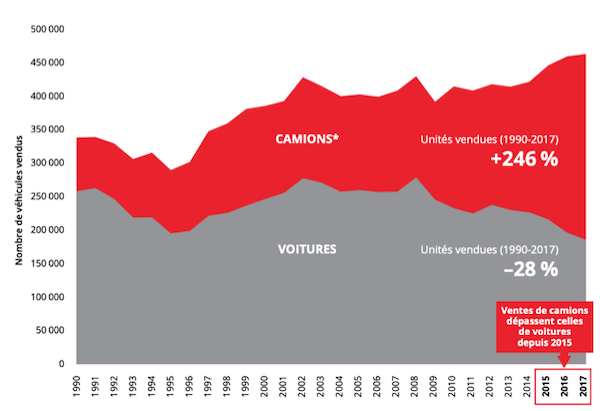 Source: The State of Energy in Quebec 2019

SUVs ON THE RISE: A TREND WITH HEAVY CONSEQUENCES

This trend has serious consequences for the economy, the environment and public health. Since these vehicles consume more fuel, they emit more GHGs. Public health experts are also troubled by the increased safety risks that SUVs pose to others in the event of collisions (pedestrians, cyclists and drivers of smaller vehicles).

NEED TO SUPPORT ELECTRIFICATION AND REVERSE THE TREND TOWARD GAS GUZZLERS

In order to continue along the path to transportation electrification, purchase incentives need to be maintained for electric vehicles for a few more years, at least until price parity with gas-powered vehicles has been achieved. 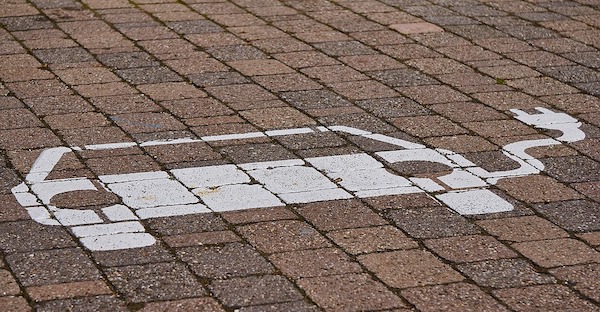 A TOOL TO SUPPORT TRANSPORTATION ELECTRIFICATION

To contribute to the conversation about funding the sustainable mobility policy, Équiterre is working with the economic analysis firm Dameco on a tool to help create a revenue source to pay for transportation electrification in Quebec, and to address the trend toward light truck purchases (SUVs, pickups and so on).

Charging a “vehicle electrification fee” on the purchase of gas guzzling vehicles, with the proceeds going toward subsidizing the purchase of zero emission vehicles, meets this objective. In the jargon, this is called a “feebate” system.

Currently, two fees are charged to owners of gas guzzling vehicles. The first is a one-time charge when registering the new vehicle. The second is an annual registration fee based on the vehicle’s cylinder capacity. For example, someone buying a very polluting vehicle (7 cylinders or more) will pay a $205 fee at the time of purchase, plus an additional registration fee every year of $385. These fees are so low that they have little to no influence on consumer choices.

A feebate system, for its part, would generate revenues to help speed up the transportation electrification process, while curbing the trend toward purchasing gas guzzlers.

Stay tuned for the chance to see Équiterre’s full proposal!