Leger (The Research Intelligence Group) has been mandated by Équiterre and the David Suzuki Foundation to conduct a survey to assess residents of the greater Montreal area their knowledge and opinion regarding the Réseau Électrique Métropolitain (REM), a new integrated electric driverless train network linking downtown Montreal, the South Shore, the West Island, the North Shore and the airport, a project led by the Caisse de dépôt et placement du Québec.

The results showed that 45% heard of the REM project during the past 6 months, 48% didn’t and 7% refused to answer. 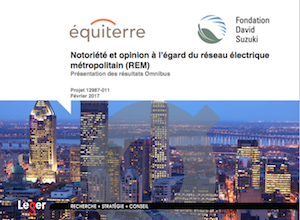