Transportation electrification: an essential route for a green and resilient recovery

As the public health crisis is pushing governments to work towards an economic recovery, electrification of our transportation systems constitutes a winning strategy, allowing us to not only reduce the environmental footprint of the cars on the road but also help develop an industrial sector which could potentially create a significant number of quality jobs.

The transportation sector does not lack for solutions to lower our GHG emissions and our dependence on fossil fuels. 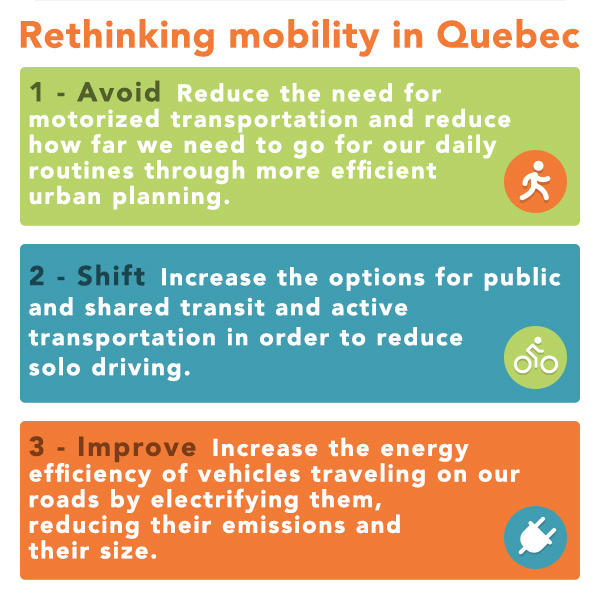 Here is why electrification should play an important role.

Because Quebec has clean energy

If there’s one place in the world where running electric makes a lot of sense, it’s here in Quebec. We enjoy one of the cleanest energy sources in the world: 99.8% renewable. On the flip side, the oil we use to power our vehicles in Quebec is one of the dirtiest on the planet (100% comes from Canada and the USA, so tar sands and shale oil)[1].

“Yes, but I heard that electric vehicles also cause pollution?”

According to the life cycle analysis done by CIRAIG, which compares a gas-powered vehicle to an electric vehicle (EV) while factoring in all cycles (from raw material extraction to waste disposal), an EV is estimated to have 29-80% less of an environmental impact than its gas-powered equivalent!

The percentage varies according to the parameters measured, namely human health, ecosystem quality, GHG emissions or depletion of fossil resources.

Unlike its gas-powered counterpart, an electric car is an environmental investment that pays for itself over time. Starting from the 29,000-km point and until the last kilometre driven, an electric car will be net positive for the environment in relation to its gas-powered equivalent, which, for its part, will generate increasingly negative impacts throughout its life cycle.

Life cycle analyses demonstrate that the manufacture of an EV and its battery represent its greatest impact, whereas for gas-powered vehicles, the greatest impact is during its use.

The question of the battery...

As for the lithium battery, the technology is still young and is constantly improving.
There are also a lot of advances in recycling, not to mention the possibilities of repurposing these batteries or using them to store energy.

The environmental and social issues posed by certain minerals are not particular to electric vehicles, but rather emerge from the digital sector, and the problem is mainly related to the overconsumption and obsolescence of some products (computers, cell phones, etc.). In other words, we shouldn’t be questioning transportation electrification because of these issues, but rather our consumption habits in a broader sense.

And what about electric vehicles outside of Quebec?

According to a recent study by the scientific journal Nature, when we look at the situation in the United States, where most electricity is generated from fossil fuels, EVs still come out way ahead of their gas-powered counterparts from an environmental standpoint, even when comparing the least efficient electric vehicle to the most fuel-efficient gas-powered vehicle.

The study indicates that the same trend is observed throughout the world.

Here are some innovative, world renowned “made in Quebec” companies that embody the benefits of this emerging industry, that goes well beyond electric cars:

Another economic benefit: weaning ourselves off oil and instead running electric is another way to lower our trade deficit and invest in our public services. In 2018, imports associated with petroleum extraction and production accounted for $11 billion of Quebec’s balance of trade[2].

Notwithstanding all the above, the fact remains that the cleanest car is no car at all… electric or otherwise. With that in mind, it is essential that alternatives to single-occupant driving be promoted as much as possible to reduce the number of cars on Quebec roads.

Our government relations team is hard at work encouraging our elected officials to promote these alternatives. Learn more about how.

Équiterre is encouraging the government to further develop public transit and active transportation in Quebec. In the meantime, electric vehicles could be the best option for many.

To book a test drive and make an informed choice, consult the Running Electric website.