The electric car explained in 5 questions

What are the different types of electric vehicles?

There are four types of vehicles that rely on electric components at the level of either the engine, the braking system or the presence of a rechargeable battery.

This type of vehicle runs on a battery and an electric motor and must be plugged into an external source of electricity for battery charging. All electric vehicles have a regenerative braking system that returns energy to the battery. This system uses the vehicle’s electric motor to recover energy spent during braking that would normally be lost in the form of heat in a combustion engine.

To find out more about the electric car models available in Quebec, visit the website of the Quebec Electric Vehicle Association (AVÉQ) or that of the Innovative Vehicle Institute (IVI).

Plug-in hybrid vehicles operate like hybrid vehicles in that they rely on both a combustion engine and an electric motor supported by a battery, but the battery can be recharged using an external power grid (unlike the hybrid vehicle). Their battery range is limited, varying between 20 and 85 km. This category includes models such as the Ford C-Max Energi, Toyota Prius Prime, Mitsubishi Outlander and several others. Extended-range electric vehicles come with an electric motor powered by a battery, but are also equipped with a gas-powered generator that can recharge the battery. Notable models in this category include the Chevrolet Volt and BMW i3 REX.

These models are powered by a battery-driven electric motor and a gasoline engine with a fuel tank. Unlike the plug-in hybrid, these models cannot be recharged from the external power grid. Hybrid vehicles can generate significant fuel savings despite the fact that they consume gas each time they are driven.

For a list of the hybrid electric vehicle models available in Canada, visit the website of the CAA.

HOW DOES BATTERY CHARGING WORK?

Battery charging is mainly done at home and at work (90%). Drivers of electric cars usually leave home with their battery charged to full capacity. More and more employers are offering free charging to their employees, making it possible for them to cover greater distances with their electric vehicles on a daily basis.

Travel planning is made easier thanks to apps such as Plugshare and ChargeHub which provide information on the location and real-time availability of charging stations.

All EVs come with a portable charger that can be plugged into a standard 120 V wall outlet. Although it is widely available, this type of charging is mainly used as a back-up when visiting or for the smaller batteries in plug-in electric vehicles (range of 20 to 40 km), since full charging can take up to 34 hours. The average charging speed of a 120-V battery is 6 km per hour of charging.

Level 2 charging uses a 240 V station and is 4 to 5 times quicker than Level 1 charging, with an average speed of 30 to 40 km per hour. These charging stations are often installed at home by a certified electrician and usually do not require any modifications to the home’s power supply. The Quebec government offers rebates of up to $600 for the purchase and installation of residential charging stations. This type of station can also be found in the public charging network, at municipal sites and at certain retailers and employers.

If you live in a condo, it is still possible to install a charging station at your home, but you have to obtain the authorization of the condominium’s board. To get a clear picture of the situation, it’s best to start by consulting a certified electrician, who can determine whether it’s possible to run a cable from the parking spots to the electricity meters. However, the best solution is to install a charge controller for electric vehicle charging stations that allows the direct billing of electricity to the owner’s Hydro-Québec account.

To choose the most suitable option for you, consult a charging expert or an electrician.

Does an electric car really cost more than a gasoline-powered car?

While It’s true that the initial purchase price of an electric car is often higher than that of a gas-powered car, it’s important to keep in mind that the government offers rebates of up to $8,000 for a new electric vehicle and $4,000 for a used vehicle. What’s more, when the cost of vehicle use is considered, the electric car is much more economical: you don’t need to buy fuel and maintenance and insurance costs are much cheaper! For a Quebecer driving an average of 20,000 km per year, the purchase premium will be absorbed within one to three years depending on the model chosen, after which he or she will save nearly $2,500 annually!

And that’s not all: you can save even more when you buy a used electric vehicle since its depreciation will have already been amortized. 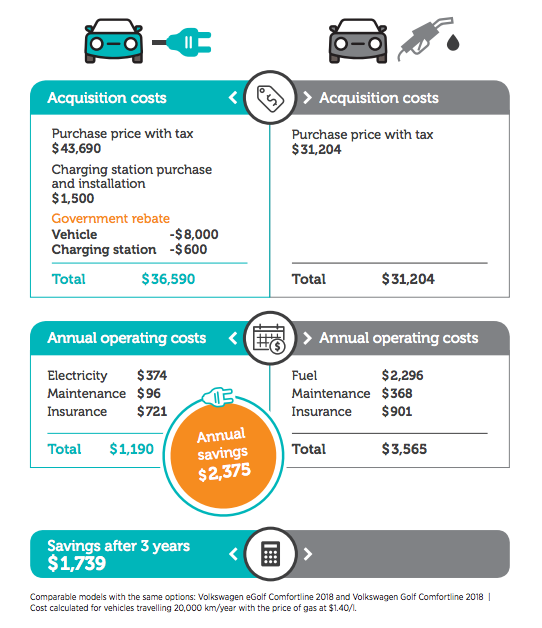 Savings on maintenance and insurance

When calculating the savings on maintenance, we factor in that electric vehicles don’t need oil changes and require fewer brake repairs and less servicing. For the purposes of this comparison, for a gas-powered car, the cost of an oil change is $60, paid twice a year. Brake maintenance costs are estimated at $500/120,000 km for an electric vehicle and $500/50,000 km for a gas-powered vehicle.

The savings on insurance are based on the 20% reduction offered by many insurance companies to electric vehicle owners. Check with your insurer for more information.

In addition, electric vehicle owners enjoy the privileges of a green license plate, including free access to certain toll roads and ferry services, free parking or VIP parking spots in certain municipalities and workplaces, and the right to travel on certain reserved highway and road lanes.

Visit the Government of Quebec website for details on all the advantages offered by the green license plate.

Does the electric car meet the transportation needs of most Quebec drivers?

There are now over thirty models of electric and plug-in hybrid electric vehicles available on the Quebec market. There’s a model for every taste and budget, whether you’re looking for a subcompact, a sedan, a station wagon or even an SUV!

To make sure you choose the most appropriate model for your situation, it’s important to assess your travel needs. You can do this by adding up your daily distances travelled (work, daycare, school), your frequent trips (stops along the way), plus a little extra to account for winter driving and unforeseen trips. Electric cars lose about 20 to 30% of their range in winter, but in very cold temperatures range may decline by as much as 50%. Don’t let this scare you though: the average temperature in winter is only -10 degrees!

Quebecers drive an average of 20 to 50 kilometres daily to commute to work. Today’s electric vehicles have a range of between 150 and 350 km, which is more than enough to cover most daily driving distances.

If you make occasional trips (4 times a year) over long distances that exceed the range of an electric vehicle, it’s important to check on the availability of fast charging stations along your route and at your destination and to estimate the average time it will take to charge your vehicle sufficiently to reach your destination or to return home.

For exceptional trips (once or twice a year), there are several other options you can consider: you can use your family’s second car, borrow a car from a friend or family member, use car sharing or rent a vehicle. Overestimating your needs can have an impact on the choice of model, the vehicle cost as well as the environment.

For more details, see the Branchez-Vous brochure on choosing an electric vehicle that meets your needs.

Is the electric car a more ecological choice than the gas-powered car?

People often raise concerns about the environmental impacts related to the manufacture of batteries for electric cars, but overall these impacts are actually less significant than those associated with gasoline use. 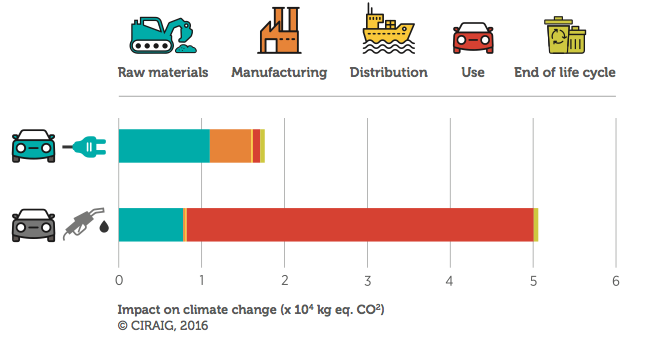 When its entire life cycle is considered – i.e., from the extraction of the raw materials to final recycling – the electric vehicle represents a better environmental choice than the conventional gas vehicle. It emits 80% less GHG over a travelling distance of 300,000 km than a gas-powered car in the charging context in Quebec, where hydroelectricty accounts for 98.5% of the energy mix (CIRAIG 2016).

However, in locations where the energy mix is dominated by fossil fuels (over 50%), such as China and Canadian provinces like Nunavut and Nova Scotia, the electric vehicle would be less advantageous because more pollution is generated by charging (electricty produced by coal- or oil-powered plants). The electric vehicle becomes a better environmental choice than the conventional car where the share of fossil fuels in the energy mix is below 50%.

There are even predictions that, in the near future, the widespread use of electric cars will lead to the introduction of so-called “smart grid” technologies based on the decentralized, smart management of the electricity grid. Since they are plugged in at home or work most of the time, electric cars could occasionally be used to supply power to the grid through a bidirectional connection, thereby making it possible to reduce demand for electricity during peak consumption periods or to sell back stored power to the main power supplier, leading to a lower energy bill for electric car owners.

Batteries come with a guarantee of 8 to 10 years (or 160,000 km), depending on the manufacturer. After roughly 150,000 km (10 years or more), they still possess 80% of their capacity, which is enough energy to cover the average distances travelled by Quebecers. After that, the batteries can be re-used for other purposes:

Generally, the user of an electric car that has reached the end of its useful life has the option of turning for recycling to their car dealership or to the Quebec Association of Auto Parts Recyclers (ARPAC). In most cases, the batteries are sent to specialized companies that dispose of them in an appropriate manner.

From a sustainable development perspective, recycling is a critical issue in the electric vehicle sector, as in all industrial sectors. To encourage the transition to the electrification of transportation, it is crucial to reduce the impacts resulting from the extraction of minerals used in the manufacturing of electric vehicles and to promote the shift toward a circular economy. The high value of the materials used and, in some cases, their geostrategic importance, will inevitably lead to better legislation and improved recycling processes in this sector.

You’re convinced and ready to purchase an electric vehicle?